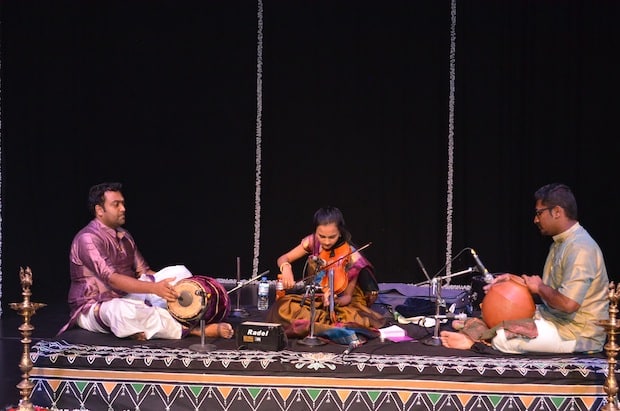 Bhairavi Raman, a student of Murali Kumar’s Raaga Sudha School of Music, performed a full solo concert on March 29 at the Chandler Centre. The concert was organized in aid of Cancare Foundation, a Chennai based NGO set up by a group of oncologists and social workers with the objective of providing free of cost holistic care to patients with cancer. Their objective is to support both patients and their families.

Those who have been following Bhairavi’s rise and rise over the years, were treated to some beautiful music that evening. She has been performing alongside her guru Murali Kumar at several concerts; she has accompanied several established local vocal artistes and has been part of orchestras of several dance performances.

Bhairavi began with a saveri composition of Muthuswami Dikshitar and set the tone for the evening with a flawless rendition. This was followed by the soulful ahiri, a Shyama Shastri kriti, delivered with finesse worthy of a professional. The hindolam raga Dikshitar kriti which came next was embellished with raga alapana and kalpana swaras, making it a masterpiece that was simply soaked in emotion. A brisk and majestic atana composition of Tyagaraja, Bala kanakamaya was the next number. Papanasam Sivan’s well known composition in mohanam delighted the audience, and the Hamir Kalyani oozed melody in every swara; janaranjani and bhairavi were equally delightful, followed by tani avarttanam by Bala on mrudangam and Nanthesh on the ghatam. Their korvais were flawlessly executed, and their percussion support enhanced the violin concert in every way. It was clear from the evening’s concert that the young musical trio are not dilettantes.

Bhairavi’s technique was full of ‘bhava’ or emotion, and those familiar with the kritis would have observed that she emphasized the right notes, in keeping with the lyrics of the grand compositions she played; Bala and Nanthesh played with confidence and ease, striking the right note in every sense.