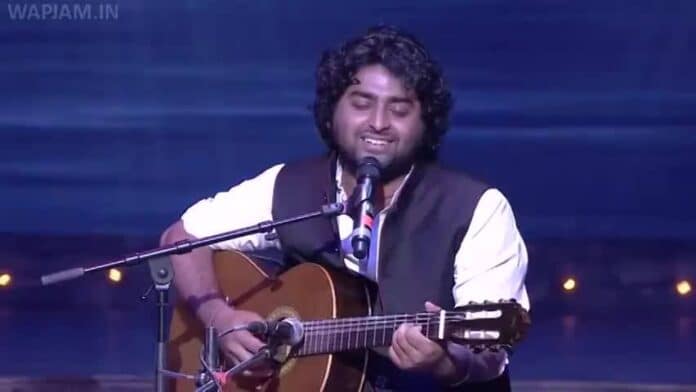 Reading Time: 2 minutesArijit Singh may be a singer to the stars, but in Sydney he is happy to have his audience sing along

The Sydney Town Hall was exploding with energy and excitement when Bollywood playback singer, Arijit Singh performed there recently.

A strikingly beautiful sandstone property built alongside St. Andrew’s Cathedral, the Sydney Town Hall is quite an atypical venue for a Bollywood music concert. But intuitive musician that he is, Arijit carefully chose soulful, romantic numbers for the performance, apt for the relaxed venue. Of course it helped that this particular genre is somewhat his forte!

An obvious way to begin was with the mega-celebrated love anthem Tum hi ho from Ashiqui 2 which brought Arijit his first Filmfare, IIFA, Zee Cine, Screen and several other awards in 2013-14.

Hailing from West Bengal, India, Arijit came to the limelight as a remarkable singer in the music reality series Fame Gurukul in 2005. He also assisted music director Pritam for a while and has sung for many Bengali movies as well.

On the beautiful Sydney evening, Arijit entertained with most of his popular numbers including Muskurane ki wajah, Laal ishq, Kabhi jo badal barse, Samjhawan and his debut Bollywood song Phir mohabbat karne chala, and many more. A commendable guitarist, what was impressive about Arijit’s act, was the candid and pure extempore – no paper with lyrics or music notes for reference – a rare attribute in the new or veteran Indian playback singers performing live.

Soon the concert turned into a sing-along.

“I have never performed this song before so I am not sure of the lyrics, to aap log sambhaal lena.”

And surprisingly we all knew the lyrics and sang along with almost every number!

Throughout the concert, Arijit kept amazing his fans by weaving in sensational numbers like Pehla nasha by Udit Narayan, Laagi tumse mann ki lagan by Rahat Fateh Ali Khan, Be intehaan, Pehli nazar mein, Tu jaane na by Atif Aslam to old hits like Jo wada kiya by Mohd. Rafi, creating a marvellous medley of evergreen love songs. Breaking into the Bengali version of the Bheegi bheegi si hai chorus, he tossed in some more delight to his lucid spontaneity.

Accompanying him for duets like Kabira and Chahu main ya na was Supriya Pathak, a young and rising playback singer, and a power-packed live band which impeccably re-created each track as if they were recorded ones.

Earlier in the evening, pop singer Sunny V had warmed up the audience an entertaining Bollywood gig before Arijit’s appearance on stage.

The concert was presented by Education Centre of Australia and Raaga Studio, a venture by Bollywood music director Aadesh Shrivastava and Rupesh Singh.

With a packed house in attendance, Arijit’s stellar performance has certainly upped the game for anyone from India’s entertainment industry touring here.