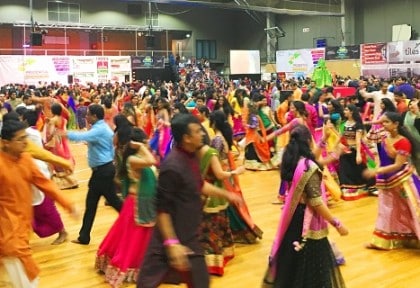 Imagine hundreds of brightly dressed dancers, spinning in circles in unanimity as the music slowly speeds up to the beats of the dhol. Performed to honour the warrior goddess Durga during Navratri, the famous Indian folk dance forms Garba and Raas are actually dramatisations of the final battle between goddess Durga and the devil Mahishasur. This year the season of Shardiya Navratri has already begun in Sydney with the Indian Cultural Association’s recent Garba event led by the well-known Gujarati singer Atul Purohit.
Around 4,000 enthusiastic Garba dancers passed through the Whitlam Centre over the two days as the event marked its 10th anniversary.

While there were beginners like me and my friend, most people were advanced level Garba dancers tapping their feet to the traditional old favorites like Dholida Doli Re Vagad and Sabse Bada Tera Naam’ and also new ones such as Dholi Taro and Nagade Sang Dhol Baje. Adding to the non-stop Garba enthrallment, were songs like Charar Charar maru chakdu chaale, Ke Hove Hove’and Sanedo Sanedo.
Every time one of these numbers would play the thousands of people would scream at the top of their voices!
The feelings of excitement and nostalgia were palpable; the older generation were used to hearing these tunes when they went Garba dancing back home in India.

Little girls, in matching Indian attire to their mothers or sisters, surpassed all levels of cuteness. Dozens of men in the traditional Gujarati style of colourful outfits were also in the crowd to add to the dancing rhythm. Although we felt there was a chance of crashing into someone with every second move we made, everyone seemed to be in sync, making us even more eager to learn the routine. The spinning, hand-clapping and sweeping of the arms were difficult to master, but in the end we did get the hang of it.
When it comes to Gujarati folk music and Garba there is no bigger name than Atul Purohit. Garba lovers are fans of his melodious songs like Vhalamni Vaat Kai, and his 1980s album Tara Vina Shyam became an instant hit and earned him the tag of World’s Best Garba Singer. Purohit has also achieved the Gujarat Gaurav Puraskaar.

In 1992 he established another group The Rutambhara Group and hasn’t looked back since. The Rutambhara Group is one of the major attractions at the United Way of Vadodara Garba event. For 22 years United Way has claimed to have the largest gathering of people at its venue during Navratri. Considering the huge crowd that it attracts every year, United Way organisers have even applied for Guinness Book of World Records for having the highest number of people at its venue.
Chirag Parikh, Kaushal Parikh, Viral Patel and Jigar Parikh organised this grand Garba event in Sydney. The evening turned out to be a stunning display of dancers in traditional attire with some serious moves thrown in, and was a complete, fun-filled family event.