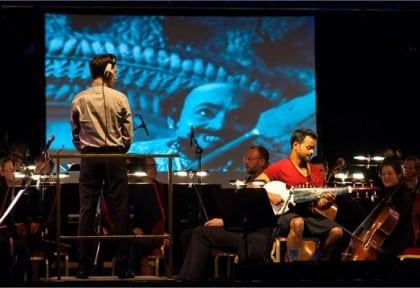 Rock star or super star, call him what you may, but the closing show of the 10th anniversary of the OzAsia Festival in Adelaide lived up to its hype and expectations. Soumik Datta, a sarod maestro, originally from Calcutta who now calls London home, brought this ultra-unique show to Adelaide for its Australian premiere.
After unprecedented rain washed out many of the performances this year, the grand finale, ‘King of Ghosts’ was moved indoors to the very fitting setting of the Festival Theatre.

At its simplest level the show is a film accompanied by music. What Soumik has done is marry the old with the new; a vintage film in black and white has been teamed with a modern piece of music especially composed for the purpose. As a child growing up in Calcutta, Soumik watched the 1969 Bengali film Goopy Gayen Bagha Bayen by Oscar winner Satyajit Ray. Later, for the 2014 Edinburgh Mela, when he was commissioned to produce a show, he came back to the film and, together with musicians Cormac Byrne and Johannes Berauer, created this spectacular.
The stage was set with an ensemble from the Adelaide Symphony Orchestra (ASO) on one side and Byrne’s massive set of percussion instruments dominating the other. Then Soumik walked on.
Dressed like a rock star, sporting a headband and scarf, with the sarod dangling from a strap around his neck, this was a million miles from the traditional look of sarod players of the past.

The musical accompaniment was a mix of traditional raga-based melodies and contemporary sounds.
“I composed the melodies, and then Johannes fleshed them and set them for the parts,” Soumik said.
Talking to Johannes Berauer later was quite a revelation. He comes from a jazz composition background and is much sought after; he has worked with a large number of musicians and orchestras across the globe. For this performance he was conducting the ASO.
Satyajit Ray’s grandfather wrote Goopy Gayen Bagha Bayen as a children’s story. It is about two simple men, one who has a gift for singing and the other in playing the dholak or drum. Soumik’s composition is sympathetic to this: “In the music, the sarod represents the voice and the percussion takes the part of the drums.”

This worked perfectly, and the ASO, highly accomplished as always, came in to set the scene or in general accompaniment. However, occasionally the orchestral musicians were somewhat over-shadowed by the stronger notes of the sarod and drums. Nonetheless, the violins, and the haunting cello, together with the wind instruments, helped create the atmosphere in the film, which weaves between reality and fantasy. The music was particularly brilliant in the scene of the dancing ghosts.
Comments from the audience after the performance were quite clear. They loved it. They appreciated the synchronisation between the movie and the music; the whole performance was seamless. The music followed the mood of our heroes and was joyous when they were given magical powers and sombre when it needed to be.
Cormac Byrne, sitting with what looked like his armoury of instruments surrounding him, was excellent. At times he made the sounds and beats of the tabla to accompany the sarod, at others he used any number of instruments, it seemed simultaneously, as only an octopus should be able to do.

The film and music continued at a rattling pace. There is a great scene when the friends are playing to win the heart of the king in a music competition. The subtitle reads ‘we are simple village boys’, and for their music the caption read ‘it is the language of rhythm, the language of rhyme.’ Words that couldn’t be truer. On one hand, we had the traditional Indian musicians, looking a bit dour, sitting on the floor, in the scene of the film, and in stark contrast we had modern musicians on the stage in front of us, with a collection of shiny drums, a conductor with the ASO, and the sarod playing rock star. How times change.
As Soumik said, “Things evolve. You find the truth in what you are doing.”

A key segment of the film is how our simple musicians manage to stop the battle between two brothers in neighbouring kingdoms. They stop the war with their song and drum and a few tricks with their magic powers. There is a memorable caption at this point, ‘on bloody wars, no nation thrives.’ For their reward the two men end up marrying princesses in each kingdom. A happy ending.
The performance closed with ringing applause and an encore. For me, almost the best of the evening came after the performance. To see Soumik, Cormac and Johannes give their time so readily and generously to members of the audience spoke volumes about who they are. I think they enjoyed the evening playing for us and we loved having them here.