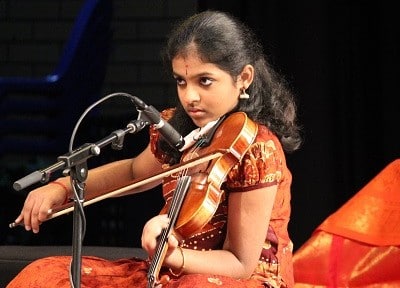 The standard reaction to young Australian-born or raised Indians taking not just an interest in, but embracing and dedicating time to Indian classical music or dance, is astonishment.
What those who express this don’t realise is, for a vibrant community of young people here in Melbourne, classical music and dance is and always has been a natural and close-fitting part of life. Classes. School concerts. Inter-school concerts. Music festivals.

Regardless of whether you’re doing the VCE or have demanding full-time job, whether you have no life or your life is full to bursting, this is a constant, and it’s important.
All this came home to me at the fundraising concert held by two of Melbourne’s most talented young Carnatic vocalists, the ‘Melbourne Brothers’, Raghuveer and Narayan Rangan, to raise funds for Cancer Council Victoria. The duo, who are students of maestro O.S.Tyagarajan, and also work and study full-time respectively, held their first fundraiser for this vital cause in 2015, raising $3000. Accompanying them were two other rising young musicians, Arushi Ramesh of Chennai on violin and Sydney’s Bala Shankar Shastri on mrdangam.

The brothers perform regularly in Melbourne and India, and this experience and immersion shows in their performance. Their vocals blended confidence and subtlety, treating every raga they sang as individual, whether it was Swathi Thirunal’s deeply majestic ‘Palaya Madhava’ in Asaveri, Tyagaraja’s Varali composition ‘Etti Janma’ or, what was in my opinion the vocal highlight of the concert, his gorgeous and immensely popular composition ‘Brochevarevare’ in raga Kamas. The latter was handled both melodiously and crisply, with a nuanced and fearless neraval (improvisation on lyrics) from both.
It was my first time hearing Arushi Ramesh – and it was a fabulous introduction. The youngest of the group, she played with the delicacy and beauty of someone who has handled a violin for much longer, reflecting her illustrious guru lineage – she was the youngest student of violin vidwan Lalgudi Jayaraman, and has continued under his daughter, vidushi Lalgudi Vijayalakshmi. Her alapana (free exploration of a raga before the composition) on raga Varali in particular was complex and brilliant with ‘finger pyrotechnics’.

For the Ragam Thanam Pallavi, the staple showpiece of Carnatic concert repertoire, the brothers chose a challenging thalam, or rhythm cycle, ‘Chathurasra Jathi Jhumpa’ in Kanda Nadai (too hard to explain here, but the name should convey enough!). This, combined with their multi-raga Pallavi (lines that improvised upon), displayed their versatility and control over this most demanding of Carnatic pieces. Bala Shankar’s Thaniavarthanam (percussion solo) was done with an ease and lightness of touch that belied the complexity of what he was playing.
This concert, and its cause, have a personal connection for Raghuveer and Narayan. As their father Kasturi Rangan explained, he lost his own brother two years ago to a brain tumour. “We can’t get him back,” he said movingly.
“What we’d really like is to be out of a job,” Ruby Richardson, community fundraising officer at Cancer Council, declared in her speech. $24 million was raised overall for the Council last year, with the funds going to groundbreaking research and vital support and prevention programs.

Melbourne’s well-known mrdangam guru Sridhar Chari was chief guest for the evening. He too – as so many have been – has been touched with the cold finger of cancer, having lost a close friend to the disease. He was “really pleased”, he said simply, to see all four young musicians “able to take things forward”, in the realm of Carnatic music.
And I believe my generation of musicians – within and outside India – will do exactly that. Because we understand that music isn’t just our heritage: it’s passion, power and change.