Music and dance for the soul 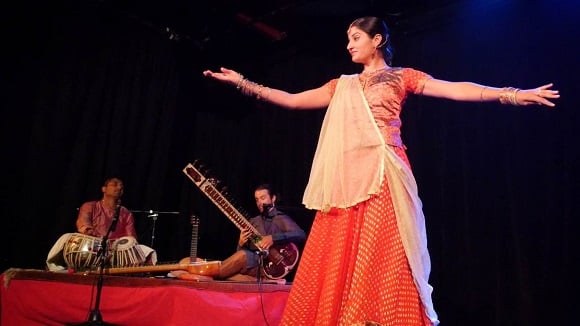 It’s always at this time of year that Adelaide comes alive as the Fringe takes hold of the city. With the 2015 programme boasting over 1000 events, the choice is unlimited.

This year’s Fringe included a show called Sadhana: Sublime Music and Dance of India. The dance for the performance was Kathak, an ancient form of North Indian dance which was transformed with Persian influences by the Moghul emperors. This, to my mind, is a lovely, romantic form of dance perfectly suited to be matched to music and was often incorporated in movies in the past. The dance needs music to give it life and the music is enhanced as demands are placed on the musicians to please the dancer.

We are all familiar with the word ‘Sadhu’. It is closely associated with ‘sadhana’. It is then not surprising to learn that Sadhana has many meanings which can be simplified as the path to reach enlightenment. Or the ‘spiritual dedication to your life’s endeavour’ as interpreted by one of the performers. This evening’s performance was surely to be a journey dedicated to enrich the soul.

It was nice to know that our performers for the evening, who are now based in Melbourne, were happy to come back to their home-town Adelaide to perform at the Fringe. The dancer Parvyn has a musical family background so has been participating fully in Indian music performances since a child. She studies Indian classical vocal and Kathak dance at the Kadamb Dance Academy in Ahmedabad. Australian sitar player Josh Bennett is an exceptionally gifted musician, at home on several instruments and in a variety of world-styles. He has been studying sitar in Ahmedabad under the guidance of Smt. Manju Mehta for the past 15 years.

Indian music and dance are nothing without the tabla and Jay Dagbar is a seasoned professional in that role. Coming from a family steeped in the tradition of manufacturing tablas it’s not surprising to find he has such a love for the instrument. Trained at the Saptak School of Music in Ahmedabad he plays in the Benaras Gharana style. All three have recently returned from performing in India.

As is traditional, the evening started with a brief invocation to Guru Brahma Guru Vishnu sung by Josh. The invocation is a dedication to the glory of the Creator. It’s a melodic chant and sung with restraint and solemnity. His guitar with its deep, pleading notes was a perfect accompaniment and the dance by Parvyn made the piece quite special. Her facial expressions, intricate movements and postures were quite alluring and much appreciated.

An Indian classical music evening is never complete without a tabla solo. This was the occasion for Jay to display his virtuosity. He was accompanied by the dilruba with Parvyn also performing a brief but pleasing dance to the tabla. The energy and speed of the display ended in a rousing crescendo much to everyone’s appreciation.

While musicians are tied to their assigned spots on stage the dancer has the freedom to roam and communicate with the audience and gain their attention. In a red lehnga adorned with gold bindis and a gold chunni Parvyn delivered a performance of controlled poise and grace. Kathak is a dance that invites the audience, brings them closer and is not aloof. A smile, a look, a movement of the hand or gingerly holding the lehnga while beating the rhythm with the feet but done well is what it takes to captivate the audience. The night’s show confirmed that Parvyn has what it takes in this regard.

We had Josh playing Raag Maru Bihag on the sitar. I was a little surprised at the very short alap as the music moved into the gat fairly quickly. It’s perhaps a forced necessity due to the short time available for the evening’s performance. Or it could be that audiences may have a preference for the faster music with percussion (tabla) accompaniment. Sometimes compromise is necessary. But having said that, nothing could be taken away from the power created by the music being played for us. The intensity of the sitar and the Jay’s tabla both working in support of each other and coming back together on the first beat of each cycle was quite impressive.

The next item was Raag Jog. This is an evening raag devoted to the katha or story of Radha. So it was quite appropriate that Parvyn portrayed the story of Radha in dance. Once again, deft movements or lingering poise, the tabla and sitar supporting the image of Radha as she moved about the stage was all quite evocative. Of necessity, this piece had to be short and had in it some improvisation but was based mainly on a dance composition for the raag.

The encore for the evening was a shloka Kasturi Tilakam sung by Parvyn describing Lord Krishna at play. Jay’s mesmerizing tabla and the deep, gentle strains of the dilruba were the perfect accompaniment to Parvyn’s clear voice. Just the right note on which to end the evening’s show.

The audience had been treated to a variety of pieces full of emotion, virtuosity and class. However, all performances have to come to an end. They transport us to a world of dreams but we have to come down to earth eventually as the lights come on. Rapturous applause speaks for itself. The music and dance have lifted our hearts and enriched our souls. And we have three accomplished artists to thank for that.