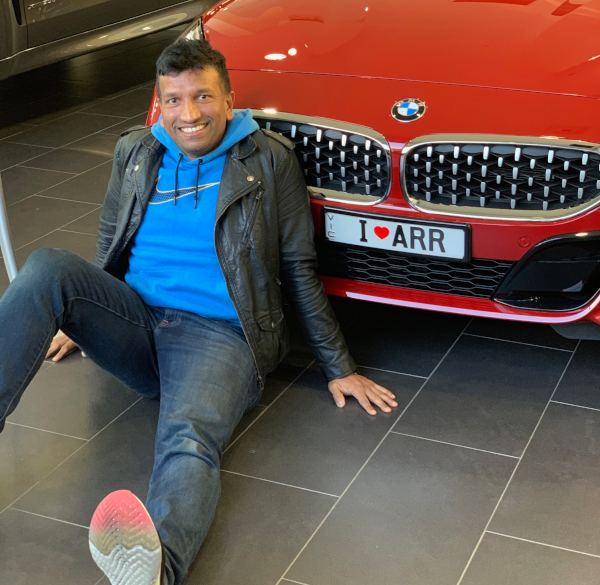 Reading Time: 3 minutesMelbourne-based Chander Ram, an ardent fan of Indian music director AR Rahman has inscribed the maestro’s name on the number plate of his brand new BMW Z4, which he says is his dream car.
When Chander tagged AR Rahman to a tweet featuring the picture of the car, which reads ‘I Love ARR’, there came a surprise! Rahman replied to his tweet saying, ‘Drive safely’.
Well, that was it – Chander went viral.

“800 friend requests on Facebook and some hundred requests on Instagram, many followers on Twitter,” Chander told Indian Link. “I certainly didn’t expect any of this – my intent was not to become famous!”
About the novel choice for the number plate of his dream car, he revealed, “It was purely to show my love and respect for Rahman. I tagged him to tell him that I’m one of his biggest fans; I have not missed even a single track of his ever since Roja. My day begins and ends with his songs.  I wanted to have a memorable number plate to cherish all my life, and obviously, I was listening to Rahman’s songs when I thought about the number plate. That’s when I decided that I should have his name on the car. I tried to have his full name on the plate but due to space constraint, I chose ‘I love ARR’.”
He added, “It was overwhelming to see his reply on Twitter. Actually, I was heading to a marathon on the Great Ocean Road when lots of people congratulated me on Twitter after Rahman’s message. It gave me all new positive energy to kickstart a marathon.”

Chander, an IT professional from Bangalore, is also an avid fitness enthusiast. He runs marathons and competes in all the major events in Sydney and Melbourne. No prizes for guessing what music he listens to while running!
“An electrifying song like Chale Chalo from Lagaan for example, keeps me motivated all through.”
The songs of Chekka Chivantha Vaanam and Kandukondein Kandukondein title track are his favourite tracks. But it is Khwaja Mere Khwaja from Jodha Akbar that he considers ‘life-changing’.
“It has been a ritual to listen to Khwaja before I head to important meetings and crucial job interviews. I believe that this song is magical.”
Chander has met his beloved idol once, at a concert in Delhi for which he had travelled all the way from Melbourne. “When I met him, I told him that I want to be his bodyguard and just listen to his songs all day. He just smiled and replied, ‘You will be bored after two days’. Not only his songs but the way he made me feel comfortable, also touched my heart. There is much to learn from him.”

Chander’s tribute to his icon is not going to end with this fancy number plate: he revealed he has other plans as well.
“Rahman helps many underprivileged kids learn music through his music school KM Conservatory. I have plans to contribute something to this school in the future as yet another tribute to my maestro.”
AR Rahman: The Quiz
Chander Ram (nearly) aces Indian Link Radio’s quiz on ARR, live on air with RJ MANOJ.
What’s AR Rahman’s daughter’s name?
Khatija.
Correct!
What’s Rahman’s first composition?
Roja, but he had an unofficial composition called Set me free before that.
No! It was a Malayalam film, but Roja did catapult him to fame. Rahman was called
Dileep then.
His music academy’s name?
KM Conservatory.
Correct, he launched it in 2008.
You obviously know Rahman’s birthday.
Of course, I do. He invites his fans to his place and celebrates his birthday with them with cake etc. Two of my friends work as assistants for Rahman, which works great for me.
It’s 6 Jan 1967.
Rahman shares his birthday with someone very close to him. Who?
You put me on the spot! I don’t know the answer.
Rahman’s son, who was also born on 6 Jan in 2003.
There’s a specific window of time when Rahman composes his music. When’s that?
Only at night. He also has the habit of lighting the candle when he composes. I’ve tried doing it myself when stressed and have had to concentrate for work. It does help!
Correct answer! The only time Rahman made an exception was when he was composing/recording with LataMangeshkar.

Melbourne musician Ashwarya is making her own rules

Next round of $50K for Hindu community celebrations now open