KASHIF HARRISON is at first underwhelmed, then overwhelmed, by the music icon who has long inspired him 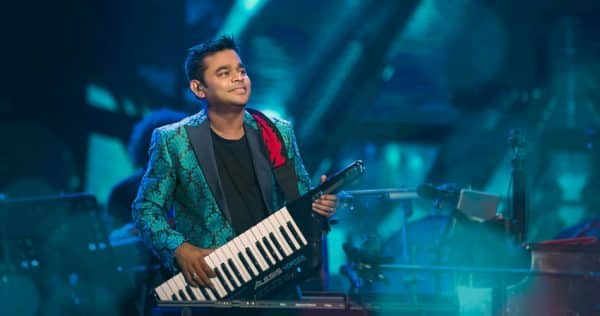 The first ever music album I purchased on my own, was Rangeela. It was an audio cassette. I was eight years old at the time and already a fan of Hamma Hamma, Urvasi Urvasi andMuqabala, not knowing that a revolutionary change was occurring in Indian music at the time.
Well, now here I was, still the very same fan, waiting to see AR Rahman, the revolutionary, in action up on stage.
I was all agog with excitement getting here, expecting to fight through the hordes. But the crowds were not what I expected them to be. My special-invite tickets were super close to the stage, and I was surprised to see young families with kids as young as new-born babies in my vicinity.
The show started an hour later around 8pm.
If I was underwhelmed, the entry of Rahman surely made up for it. It was everything and anything I had expected it to be, a true entry like a music god amidst neon lights and some great LED stage effects. Mixing his iconic tunes, it was clear ARR knew how to make an entrance!
Being a man of few words, Rahman addressed the crowd briefly and shyly. “We’re gonna have some fun, we’ve got a great band over here, great musicians, great singers… and I hope you enjoy my music.” That was it.
With that, he launched into a huge alaap from, what else, Rockstar! Nadaaan Parinde was spine-tingling.
Band member Jonita Gandhi’s Chinna Chinna Asai (Choti Si Asha) from Roja and Neeti Mohan’s Jiya Re (Jab Tak Hain Jaan) both delivered the magic of ARR superbly. Tu Hi Re,the ultimate love song, was a pure treat, as was Tere Bina (Guru).
But with the non-Hindi songs, the arena erupted into a deafening roar, clearly defining the demographics. It was clear Rahman was not going to change his playlist even after being slammed on social media for his non-Hindi selections in the UK and US legs of his current world tour.
In fact, he defiantly offered a “tsunami of Tamil”, in his own words, in Sydney. This included my favourite song from form Saathiya!
The Tamil numbers by Haricharan a Carnatic vocalist, playback singer and musician, were memorable, and thanks to my Malayalam and Tamil childhood friends from Dubai, I took my enjoyment of them. The Aussies sitting in my row were dancing on every song played, even the slow ones (yes, that was slightly interesting to watch!) but hey, music is surely universal, especially if it’s by AR Rahman!
Musician Benny Dayal was very engaging, more so than ARR at times (there, I said it!). The two then presented an unplugged piano performance playing the music from ARR’s best movies. In Taal we got to see a fun-filled and impromptu jugalbandi between the two.
At the vocals, for the iconic Humma Humma, ARR picked Tamil – still thrilling! Benny Dayal then channelled Will i Am in It’s My Birthday and later joined Rahman for the hit Urvasi Urvasi (again in Tamil). They were accompanied by Ranjit Barot, musical director of the current tour.
The end reminded me a bit of Heal The World, the only difference being it was a message of love and peace! It was a beautifully coordinated performance that ended with the anthem from Slumdog Millionaire.
At the end, I found myself still hungry for more. The very next day I got a chance to hang out with Film Score composer and seasoned musician Gulraj Singh who was on keyboards on the AR Rahman tour. Gulraj has been working with the music legend for more than five years.
“He’s a very simple-living, spiritual man, a calm boss to work with, who respects and admires his team”, Gulraj revealed. “He is a complete perfectionist, but also fun to work with, especially when he gets impromptu on stage”.
He also shared, “Of the many works of Rahman, I have been most inspired by Rangeela. It was one of the music compositions that I grew up listening to, and performing it with ARR makes me realise the amount of work that has gone into this composition.”
On the whole, I would say the AR Rahman experience for me was different to what I expected, but in a good way! It was great to relive the music I have grown up admiring, with the man himself. Although I missed out on Chaiyya Chaiyya and Taal Se Taal Mila, I still did experience the full magic of a true musical maestro.