When the music takes you back

It was a confluence of times as two greats of contemporary Indian music performed in Perth. UMA NAIR writes. 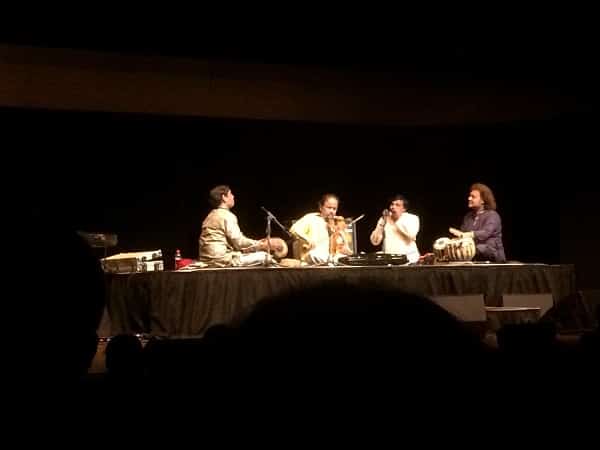 Last month, I had the pleasure of watching renowned violinist Dr. L. Subramaniam and his wife and playback singer Kavitha Krishnamurthy Subramaniam perform live in Perth as part of the Confluence 2017, Festival of India in Australia.
This is the second year of the Confluence, a 5-week nationwide festival organised as a partnership between the Australian and Indian governments with the aim of fostering bilateral ties through collaborations and performances by Indian and Australian artists.
After a busy week following Confluence performances in Sydney and Melbourne, Dr. L Subramaniam, Kavitha Krishnamurthy and accompanying artists performed their final show of the 2017 Australia tour in Perth.

Held at the aesthetic Perth Concert Hall, the stage was set for an incredible evening of music as rasikas and distinguished guests, including MLA Yaz Mubarakai, began filling the auditorium seats.
Kavitha Krishnamurthy Subramaniam commenced the show with a traditional Sant Tulsidas Sanskrit invocation. Despite being down with a cold and being on stage with tissues in hand, the moment she begun to sing, her high-pitched and powerful voice wholly engulfed the hall, with a certain indescribable magic that every member of the audience could feel down to their fingertips.
Following this piece, a solo introduction portion by keyboardist Athul Raninga (who played on the background score of film 3 Idiots) led into an intense and heart-wrenchingly melancholic rendition of Tadap Tadap Te from the 1999 film Hum Dil De Chuke Sanam. Upon a request by a Perth musician in the audience, Krishnamurthy next performed Om Namashivaya where she put her Hindustani background on display by effortlessly weaving through the S R G P D S of Mohanam/Bhopali Raaga. She concluded her segment of the show with the Meera Bhajan Jo Tum Todo Piya and Tu Hi Re from the 1995 film Bombay, leaving the audience not only with goosebumps, but also immensely overwhelming feelings of nostalgia.
The second half of the show featured Dr. L. Subramaniam performing Hamsadhwani Raaga. He begun with a brief description of the format of a Varnam, the several speeds used, as well as a short explanation of words such as vadi/samvadi swaras and gamakas – which would have proved to be very valuable for those in the audience not from a Carnatic background. For those of us who are trained in Carnatic music, or are committed rasikas, it seemed to be an interesting piece to choose to perform. The beginning phrase g r S n s r g r r s n brings back fond memories of my vocal lessons from ten years ago, sitting in a group music class on a terrace in Chennai, competing against the cawing of the crows. For context, this piece he chose to perform, Hamsadhwani Varnam is like the Jingle Bells of Carnatic music – everyone involved in Carnatic music has learnt it at some point in time.
Soon enough it did become evident as to why he went with such a simple and well-known piece. Just like many aspects of his music, it was all about executing the familiar with a fresh perspective. Subramaniam has been a part of numerous international collaborations, intertwining Indian classical music with musical forms from all over the world. Perhaps it was simply practice picked up along the way, but it was fascinating to see all the different techniques he employed, particularly in regards to bowing techniques such as tremolos, as well as ornamentation such as trills and the occasional little-finger pizzicato at the end of a phrase – all of which are not commonly seen amongst orthodox Carnatic violinists. His musical prowess was unquestionable – with fluid movements and an impeccable ability to jump octaves/harmonics as well as having perfect control over every inch of the fingerboard and section of the bow.
Dr. L Subramaniam is a qualified GP and also holds many additional honorary doctorates. He has received a Padma Bhushan award (third highest ranking national Indian civilian award) from the Government of India for his contributions to the arts and culture, as well as countless other awards and recognitions. Despite all this, he was humble enough to repeatedly remind the audience to applaud for his accompanying artists – as though he meant to say that he was not the only star of the show – earning him the utmost respect from every audience member.
The on-stage dynamic between tablist Tanmay Bose, mridangist Vidwan DSR Murthy and morsing artist Vidwan Ghantasala Satyasai and Dr. L. Subramaniam was exciting to say the least, and augmented the improvisational ragam-tanam-pallavi portion of the performance he concluded with, to new heights – making it an incomparable musical experience.
It was an honour to have been able to attend a concert of some of the greatest Indian classical artists of our time, and I hope to see more events such as the Confluence in the future continue to bring more virtuosos to Australia and keep us connected with our traditions and culture.