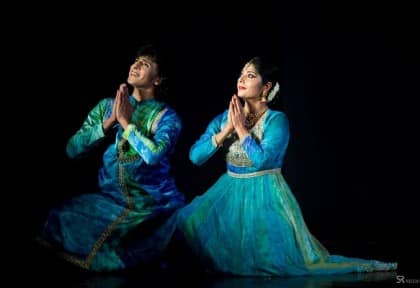 “To excel, we have to work very hard,” Nirupama and Rajendra say during an interview prior to their first performance at the Adelaide Fringe 2017. “There are no shortcuts to success. Especially in dance, which is very transparent. Our dance has to be a very honest expression… and for that we have to keep ourselves healthy outside and healthy inside, you know, which is so important. It challenges us, it is tough in that, but because we love what we do, it is not a burden. We literally live and breathe dance so (even though) it is physically strenuous, we don’t feel the strain… we love it!”

Heady words indeed. A philosophy not just for dance but for life, or should I say more correctly, for a successful life.
Three dancers, Nirupama and Rajendra, founders of the Bangalore based Abhinava Dance Company, and Rohini, performed Kathak and Bharatanatyam with a modern twist in their show called Rang (Colour). And colour it truly was, with stunningly elegant costumes where the colours melded and fused into one another even more so with every movement and pirouette.
The first dance Tarang had the benefit of energetic music which perfectly led and accompanied the Kathak dance performed by Nirupama and Rajendra. Their polished, engaging style was just lovely to watch as they played with the audience with movement and expressions, and impressed with the rhythms and patterns of sound created by the ghungrus on their feet.
Mostly Indian dance performances are given only by female dancers. In Rang, Rajendra was an equal partner in the performance. This gave greater synergy, and gave the dance more compelling patterns as they could respond to each other’s sequences, to challenge each other or dance in harmony. And who could resist the occasional teasing intimacy of glances between them.

The next piece, Varsha, was like nothing I had seen before. Monsoons are revered in India because they provide the sustenance to life. The dance gave the story of the expectation of rain, to the first drops and then the joy of playing in the downfall as the clouds break.
Quivering fingers on lowering arms depicted falling rain. Claps of thunder made the female dancer jump with fright. Playful splashing of each other added to the fun. It was a lovely piece with costumes in shades of peacock blue in keeping with the monsoon season. As Nirupama reminded us, with a hint of a smile, it was the time when peacocks danced and also the time when ladies felt romance in the air.
The Abhinava Dance Company is a major organisation in the arts in India. Nirupama explained, “We have a costume department (in which) we have 1000 costumes. We have our own sound recording studio and a performing company with over 350 students.”
It was also interesting to note that the dancers come from a joint family of 72 steeped in the arts with discussions of Sanskrit, philosophy, art and music all around them. With visitors such as Ravi Shankar, Briju Maharaj, Amjad Ali Khan, Bhimsen Joshi, there would have been no shortage of inspiration.

So it was no surprise that the performance was of such a high standard. Our dancers are holders of the highest artist “A” top grade on Indian TV and have performed to wildly enthusiastic audiences worldwide, not to mention their huge social media following. They have also been the recipients of Indian and international awards for their contribution to dance.
Rohini, the youngest member of the group, performed Panchvati, dancing the story of Sita in the forest as she is captivated by the golden deer that entices her away. Images of deer and other animals were teased out with gestures. This was a charming, playful piece choreographed to music composed by Pt Ravi Shankar and Philip Glass.
In a beautiful costume of green and deep red, Rohini danced the romance of Ram and Sita. There was a modern element to the dance as the story unfolded. Had we seen a future star in the making here?
There was a reason why Rang was so satisfying. As Rajendra explained, “It’s like a movie production. Different aspects come together. It’s not just the dance; of course we give a lot of importance to that, but apart from that, the costuming, the lighting, the stage techniques, all those things are involved in this. It’s a complete production so it immediately connects with the audience.”

And the small stage setting drew the audience in even closer as we shared their joy and love of dance.
In the introduction to the final piece, Tasha, Nirupama talked about the influence of gypsies, who migrated to Europe, on the Spanish Flamenco style of dancing. This dance was Kathak with a western twist. The plain purple costumes took some getting used to as the eyes had earlier been feasting on sparkling colour and glitz.
Dance is hard work, I said. Nirupama replied “It has given us so much joy, life is such bliss…”
It had been a magical evening, loved by the audience and one not to be missed.