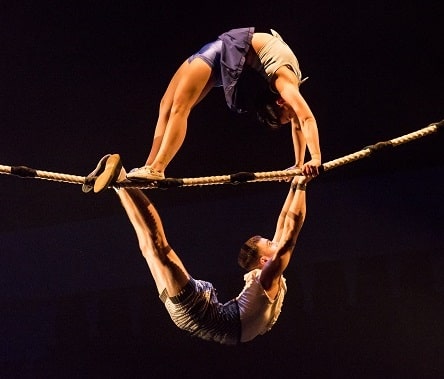 The always innovative Circus Oz will perform at Sydney Festival with its energetic and irreverent production, Model Citizens. This will be the first production for the company by new artistic director Rob Tannion, and it will explore what it means to be a ‘model citizen’ in Australia today through awesome physicality, biting satire and highly skilled, unpredictable acrobatics.
With an impressive cast of mesmerising aerialists, cheeky characters, daredevil acrobats, cigar box juggling, hula hooping and backyard banter, Model Citizens subverts the suburban dream.
Model Citizens seamlessly blends the risk and beauty of breathtaking physical improbability with theatricality, choreography and Circus Oz’s distinct brand of Australian humour.

Over-sized, everyday objects are used as unexpected circus equipment that create an intriguing new playground for the all-human ensemble.
Set inside a model-kit world complete with giant scissors and cotton reels, peg springboards and hammock-sized undies on the line, the performers swing from knife-dodging to acrobat-tossing, contorting through huge steaming irons to tumbling off a house of giant credit cards.
With a brand new ensemble of performers, a thumping live band and set design that challenges scale and perspective, the show brings a fresh sophistication to the troupe’s larrikin personality, delivering exhilarating family-friendly feats with poise and charm.
Stunningly lit and driven by a sensational live music soundtrack, Model Citizens challenges perspective, scale and concepts of normality.
Circus Oz was born in Melbourne in 1978. For over 35 years, the company has been putting up extraordinary shows and successfully touring them both nationally and internationally. From New York to South American rainforests, Madrid to outback Australia, Circus Oz has taken its self-crafted performances of wit, grace and spectacle to 27 countries across five continents, to critical acclaim. They have represented Australia at scores of international festivals.

The Circus Oz show is a rock-n-roll, animal free circus that adults and children can enjoy together. Celebrating breathtaking stunts, irreverent humour, cracking live music and an all human ensemble, Circus Oz promotes the best of the Australian spirit: generosity, diversity, death-defying bravery, and a fair go for all.
For many years the company has engaged in issues associated with social justice and a good time for all, including work each year with many charities, indigenous communities and the raising of over $392,000 in donations to support refugees and asylum seekers.