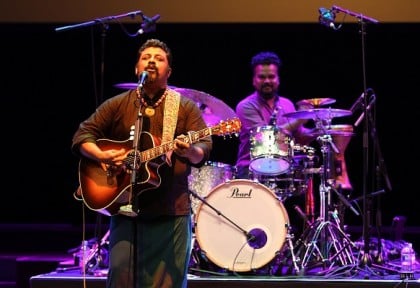 If you think ghungroos and lungis are incompatible with Rock music, think again! Visiting Indian artist Raghu Dixit not only made this traditional Indian leisurewear and accessory work awesomely with head banging music, he rocked it! Raghu’s opening concert was part of the Confluence Festival of India in Australia, currently underway. Aptly called the Masterplan for Happiness, the upbeat, 90-minute session was delivered to thunderous applause and success.
The famous contemporary artist from Karnataka, who blends several genres of music to create unique compositions, completely owned the stage at Federation Square. Sporting a colourful lungi (Indian sarong) with ghungroos (bell anklets) on his feet, Raghu voiced a fleeting moment of regret at the choice of clothing.

“I am well insulated, however I may need to rethink this outfit in this weather,” he said at the outset. With comic timing and irreverent humour he had the audience wrapped around his guitar strings in no time. Even the dignitaries in the formal VIP section gave in to some free spirited abandon whilst relishing a palatable dose of mirth and music.
The concert took off with the title song from The Raghu Dixit Project’s second album Jag Chunga (beautiful world) followed by masti ki basti (The Dewarists). The tone was set and the rest of the concert continued in a happy strain interspersed with playful banter from Raghu.
With Lokada Kalaji, he made the audience sing along and they were only too happy to oblige, mouthing the lyrics in Kannada. The global sounds of his music overcame the foreignness of any language.
Braving the elements and rain, the crowd slowly built up to over a 1000 people as walk through traffic was captivated by the peppy, snappy beats. Backed by accomplished musicians Narayan Sharma on violin, AJ on guitar, Gaurav Vaz on bass and Jo Jacobs on drums, Raghu ensured that his lyrics did not fall behind his music with strong meaning and sensitivity.
With no formal training in music, Raghu Dixit gave up his job as a microbiologist in Belgium to return to India and follow his passion. Since then he has recorded several popular tracks, movie songs and performed worldwide including a special gig for Queen Elizabeth II to mark her Diamond Jubilee pageant in 2012. The main message of his songs, and his masterplan for happiness, is to enjoy life and live for the moment.

During his energetic performance, Raghu took time to explain every song. They all boiled down to the sentiment that we should not let beautiful moments in life be drowned out by the cacophony of self-consciousness and anxiety.

Raghu continued to belt out hits like Gudgudiya Sedi Nodo, Neene Beku and Ambar much to the delight of fans who were familiar with his work. For the rest, it mattered not that they did not understand the lyrics, sung in vernacular languages, as his music had a universal appeal that transcended cultures. An interesting fusion of earthiness rooted in folk with the breeziness of modern music. Towards the end he invited all the women from the Indian city of Mysore (his hometown) to come up on stage and dance to another favourite Mysore se aayi woh. The singer also magnanimously shook hands with his fans as they queued up to meet him towards the conclusion of the concert.
Spring was finally experienced not through Melbourne’s indecisive weather but courtesy of Raghu Dixit’s exuberant, uplifting music combined with folk flecked, powerful vocals. Ignoring the inclement weather, the audience sang and danced, swayed and complied with the lead singer’s bidding, clearly enjoying his unique musical mix of the modern and the traditional. It was party central all the way with this joyous, ‘in the moment’ experience. As one ardent fan remarked post show, “Raghu was the rainbow to Melbourne’s rain.”