Meetings… wins performance of the year 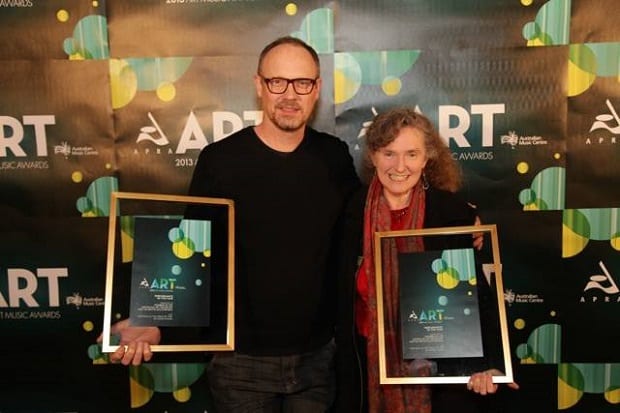 The winners of the prestigious 2013 ART Music Awards in Australia were announced recently, and the Performance of the Year award was won by Chennai-based mrudangam maestro, Guru Kaaraikkudi Mani’s Sruthi Laya Ensemble and members of the Australian Art Orchestra, for their thrilling performance of Sandy Evans’ music recording Meetings at the Table of Time, created in India. This unique work is a coming together of both Western jazz and Carnatic music, and creates a performance of depth and integrity.
The winners were announced across 11 national categories and seven state categories at the 2013 ART Music Awards, held recently at a gala function at the Parade Theatre, NIDA in Sydney.
Hosted by APRA AMCOS and the Australian Music Centre (AMC), the ART Music Awards are the only national events in Australia to acknowledge the extraordinary achievements and creative successes of Australian composers, performers and educators in the genres of contemporary art music, jazz and experimental music.
“This award is… most often won by western classical orchestras, so it was a great tribute to Guru Mani and Sruthi Laya that our performance was recognised in this way,” said Sandy Evans. “Of course people in India wouldn’t be surprised by this, but in the Australian context as you well know, it’s quite revolutionary!”
While APRA AMCOS and the AMC congratulate all the 2013 ART Music Awards winners on their outstanding achievements, Australian Carnatic musicians and art lovers of fine arts are extremely proud of this achievement. The far-reaching vision, mutual respect, relentless and innovative pursuits by Sandy Evans and Guru Kaaraikkudi Mani and his team have created this milestone.
This is another record-breaking news of pushing boundaries in music and building bridges between Australian contemporary music and Carnatic music.