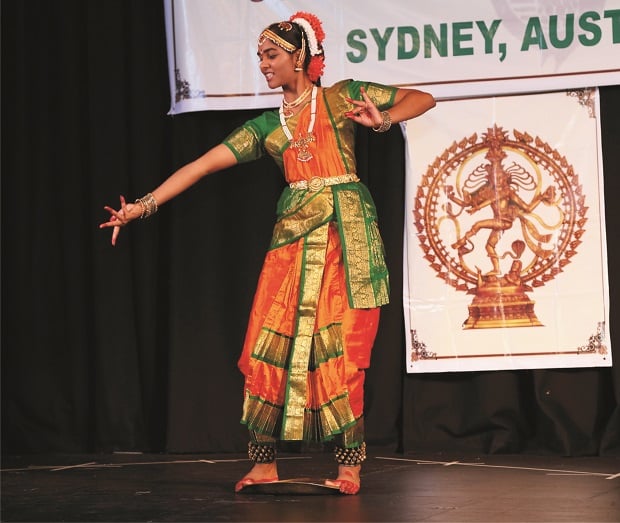 There are not enough words to describe the beautiful, elegant and enchanting traditional Kuchipudi dance performance by the students of Mayura Academy Sydney on their annual day performance held on October 19, at the Baha’i Centre in Silverwater. Guru Venkata Ramana has been a very dedicated and committed Kuchipudi guru and the performances of the students vouch his greatness, and the hard work and efforts he has made with them. Mayura Academy indeed follows the ancient tradition of Guru-Shishya parampara where the students who attend the classes are trained to preserve, nourish and promote the elegant Kuchipudi dance tradition.
The blissful evening started with lighting of the lamp and a short speech by none other than Sri U Ve Thirukoshtiyur Madhavan Swamy, a famous scholar of Sri Vaishnava philosophy, followed by the performances.
This program was a wonderful primer for even those who are unfamiliar with the art form of Kuchipudi, thanks to the helpful narration of each piece that clearly explained its context and history, and the use of basic steps, jathis to slokas, and items.
The first performance was Vinayaka Koutam performed in praise of Lord Vinayaka who wards off impediments and ensures success in human endeavours. And believe me, it was beautifully performed by young students, 9 and 10 years of age! The steps or adugulu were performed by students aged 5 years and up, and it was a feast for the eyes to watch such young children perform with grace and uniformity.
A dance sequence can never be complete without praising the god of dance, Lord Shiva. This was a performance by a mother-daughter team as Jayasree and Saakshi danced in praise of the Lord, seeking His blessings. The highlights of the performances were Tarangam and Dasavathara Sabdam.  Tarangam is a unique item in the Kuchipudi repertoire taken from Sri Krishna Leela tarangini, written by Narayana Thirtha. Here Meghna showed her expertise by dancing on the rims of the brass plate to mridangam beats. There was complete silence in the auditorium as everyone was mesmerized by this captivating performance.
Last but not the least was the masterpiece, Dasavatharam. The dancers provided a visual delight by expressing the ten different avatarams of Lord Vishnu. Narasimha avataram performed by Vandana and Deepthi was breathtaking.
In the traditional Pavamana all the performers gathered in the stage to perform the mangalam. The students who participated in this event were Aditi, Dhatri, Lohita, Saakshi, Sriharshitha, Anannya, Divik, Maanasa, Samhita, Sriveda, Chaitanya, Gamya, Meghna, Shilpa, Sushma, Chaitra, Harshitha, Mythri, Sree Harsha, Swetha, Deepthi, Jayasree, Richa, Sree Lekha and Vandana.
All the participants were presented with a certificate and a memento by guest of honour, Dhayalan Moodley. Friends of JET Australia were commended for their diligence in organising the dinner where the proceeds would be donated to a 6-month-old boy undergoing treatment for eye cancer.
To quote from NatyaShastra: ‘Na Tath Gnaanam, Na Tath Shilpam, Na Saa Vidyaa, Na Saa Kalaa, Na Sow Yogo, Na Tath Karma, Natyesmin Yannadrushyathe’ (There is no wisdom or knowledge, no art, no craft, no device or action that is not found in Natya), and that is what the students of Mayura Academy under the guidance of their Guru Venkata Ramana, proved with their performance.