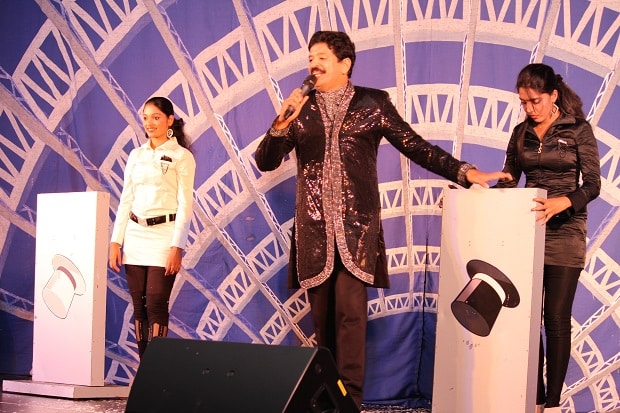 Reading Time: 4 minutesAn award-winning magician with a social conscience is a rare, but entertaining find

“Being a magician is a tough job! For every other artist, you wish they perform well so that you can enjoy their show. But for magic, it is a mind game. Every single moment that you are watching a magic show, you want to outsmart the magician. You want him to fail, so that you can win! And that is the biggest challenge a magician faces,” said Gopinath Muthukad to a packed house in the midst of his magical extravaganza Illusion 2014, held at the Sydney Baha’i Centre on March 29. But to be honest, he took on the challenge well, and did win, which was quite obvious from the intrigued looks on the faces of the audience at the conclusion of the show!

Muthukad started off by illustrating the magic of ‘power’, where he stood in one half of a circle shaped box, and as electricity was passed through, his shadow disappeared behind the opaque screen on one side of the box. The AV system decided to have some initial hiccups at this point, the background music dropped off and Muthukad looked a bit disappointed too. This happened a couple of times but as the music came back on, his ever-prevalent smile returned in full force. The act was a good one, but the interruptions dampened it a bit; however, that was when the audience glimpsed his true personality as he covered up the glitches saying that this was the real magic of power – the willpower to overcome technical hassles! Naturally, the audience applauded his spirit.

There was a very positive spirit and enthusiasm reflected throughout his show and Muthukad projected the image of being a people’s person. From time to time people were engaged, asked questions, called on the stage and encouraged to participate. Many a time, it felt that he was distracting the audience to create an illusion. For instance he called a lady on the stage, asked her a few questions and her answers were written from inside a box hanging on a pole among the audience! Or he let someone in the audience hold a locked box with a cloth bundle inside, and then opened it up to show those exact words which he had written on a piece of cloth on the stage!

Very well known as a stunt-performer and escapologist, one of Muthukad’s best tricks was escaping from a locked wooden box. He was tied in a sack and locked in a secure box by someone from the audience. And while everyone was keeping an eye on the box, he emerged from among the audience, in different attire! Amidst thunderous applause, Muthukad declared that he does not have any sort of supernatural powers and it was just rigorous practise that equipped him to do his tricks, which was pretty smart of him. It was just like declaring plainly, ‘I’m just tricking you; figure it out if you can’ in a polite manner.

As a different take on the usual magic shows, Muthukad incorporated themes into his show, using Ravivarma’s (the painter king from Kerala) pictures. An old Malayalam film song sung by Kerala’s legendary musician Dr KJ Yesudas played in the background to set the mood. Ravivarma, portrayed by Muthukad himself was seen as melancholic, longing for his subject to appear. And the lady did come out of the painting as he covered it with a curtain; danced with him for a short while and went back to the real life-sized painting! The painting included her silhouette as she stepped outside it and as she returned to it, she took the exact same original pose as before. The attention to detail was really fascinating to watch!

Muthukad has been named a magician with a mission because he tries to perpetuate ideas through his magical acts; and that’s what won him the magician’s equivalent of an Oscar award. Worth mentioning is the introduction of a socially relevant subject – the antics of Godmen. The theme of the act had a fear factor added to it, as he dressed as a scary wizard and he threaded a young woman on the point of a pair of scissors. Quite famous for his child-friendly magic tricks, this one did create a flutter among the younger members of the audience. But he compensated for it by bringing along a big, life-sized plush (TOY/S?) of Mickey Mouse and Donald Duck!

There were a couple of acts where a lady’s upper torso was sliced and her head would rotate according to the magician’s hand movements. As intriguing as it was for me, I could hear my friend sitting besides me thinking aloud on Muthukad’s technique. But I didn’t know and I didn’t want to know! It would spoil that eager child in me who is awestruck each time Muthukad does this trick. He brings out the child in us, he tells us stories that instil positive influences on us; and I guess that is the reason why most people like his shows. Even though the sound quality was not great and often fragmented, he did keep me engaged and attentive.

A magician who has been honoured with the International Magician’s Oscar, Muthukad’s life is like a fairytale as if someone has waved a magic wand at him. From very humble beginnings as the son of a farmer, he now stands high as one of the best magicians of the world. To quote him, “Magic is simple. Even a 7 year old can do it; but with 25 years of practice”.