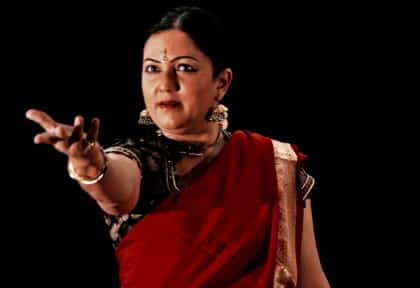 “Like every other Indian, my parents wanted me to be a doctor,” says Melbourne-raised Priya Srinivasan. “And I thought I wanted that too.”
But Priya had also been dancing Bharatanatyam since the age of five and was part of Dr Chandrabhanu’s Bharatam Dance Company, which was then performing regularly in Melbourne.
“We were actually really well-funded. As an 18-year-old I was getting paid more than most of my friends doing anything at the time. As a dancer! Which was unheard of.”

It opened her mind to the possibility of being a professional dancer and broadened her ideas about what dance could do.
“I began to see how, politically and culturally, the arts could have value in changing minds,” Priya says.
She accompanied Dr Chandrabhanu overseas to the Philippines, Malaysia, Singapore and India, and learned about temple history and dance history.
But then, “I really felt it was time for me to ask my own questions.”
So she headed to the US and completed her Masters in Dance Ethnography at UCLA. There she encountered scholar and Kuchipudi performer Avanthi Meduri who had written a groundbreaking PhD on the history of South Indian dance and modernity.
“Her research and her intellect exploded everything I knew. I learned that our dance and music forms are 60 or 70 years old not 3000 years old… everything was sort of mixed and hybrid,” Priya says.
That work and encounter also forced her to confront the shadowy figure of the devadasi, and the appropriation and reconstruction of the devadasi’s dance as ‘Bharatanatyam’ that took place in the first decades of the 20th century.
“I didn’t know what to do with it. I thought, how can I dance this form…without acknowledging this deep history?”

The way Priya has reconciled her practice, with this history – and it took a long time – is through “post-modern methodologies of interruption, rupture, and of multiple endings”, exposing what lies behind a piece in the process.
“Every piece that I’ve done with the knowledge of this history, somehow works at revealing what has been hidden.”
Her PhD dissertation, which became her first book, Sweating Saris: Indian Dance As Transnational Labour, used the dancing body as text and archive, to look at “the question of migration, the question of the devadasi figure, and women’s stories – hidden stories.”
Now back in Melbourne, Priya Srinivasan has turned her attention to the next generation of South Asian dancers and musicians. She sees a sharp swerve from the time when she was dancing in Australia.
“The professional prospects of having full-time South Asian artists has gone out the window,” she says. This, she believes, is partially a product of the marginalisation of non-Western art forms, but it also stems from the attitude of the Indian community itself.
“We don’t privilege the arts. Let’s be clear about it.”
Instead, the pursuit of careers in medicine, engineering, law, are given primary value, even when you’ve trained as a dancer and/or musician.
As a result, Priya says, “We’ve lost the value for why art matters.”

“How do we make art matter in our lives, for us as migrants and migrant children, and how do we continue it for the future?”
Part of it is a willingness to understand Indian art forms as “already contemporary”, and to thus continually reimagine and reinterpret past stories to influence our present.
Priya’s already put this into practice in Melbourne, with her ‘talking dance’ performance of the life of Bharat Ratna MS Subbulakshmi, and, more recently, in collaboration with Carnatic vocalist Uthra Vijay, titled, ‘Yogini, Poetess, Destroyer: Performing 3 Tamil Women in the 21st Century.’
“We have these amazing women writers and thinkers whom we can actually draw upon in very contemporary ways, because we’re still facing the issues they were facing,” she says.
“I don’t think we need to necessarily take off our saris and bindis and all be dressed in Western clothes in order to be contemporary, but we need to actually rethink why we’re doing the repertoire as we’re doing it, and not mindlessly repeat it for the sake of keeping cultural identity.”
Priya is emphatic about the urgent need for collaboration between different South Asian and other migrants groups as well as with Indigenous arts performers. One upcoming project is working with the next generation of performers for Multicultural Arts Victoria’s Mapping Melbourne.
“It’s because we were divided [by colonisation], that we could be ruled. And it’s the same thing [here in Australia]. The reason that we’re ruled, is because we’re divided.”