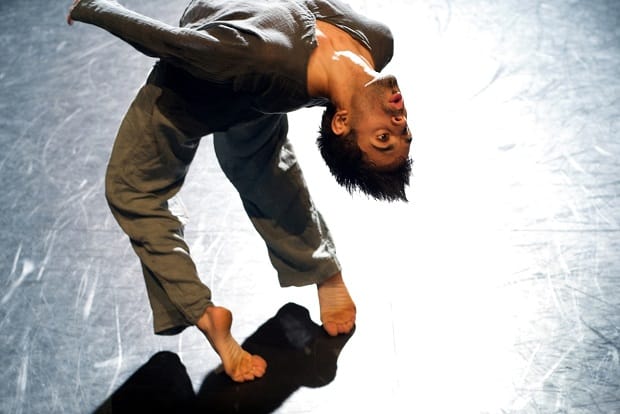 When a bird is wounded, what used to be a thing of immense beauty becomes an animal trapped in its suffering. Its once delicate grace is reduced to an anguished flurry of wings and its feet are desperate to maintain their balance. And yet the awe-inspiring creature cannot help but maintain a kind of heart-wrenching beauty, even within its painful movements.
This is what UK contemporary dancer Aakash Odedra portrayed in his animal-inspired piece In the Shadow of Man, choreographed by Akram Khan.
Haunting music by Jocelyn Pook provided the perfect instrumental dialogue as Odedra became one with the distressed creature. He began as a barely discernible shape, crouched in the dusk-like light. As the music came to life, so did the creature and we became caught up in its distress. The anguished writhing was punctuated with deeply stirring cries that were reminiscent of a trapped or wounded animal. Odedra’s fascination with animals and their movements from a young age served him well in this intense and thought-provoking piece.
The performance titled Rising at the Lennox theatre in the Parramatta Riverside complex was a standout part of the Parramasala festival. It began with Nritta, an abstract pure dance piece as suggested by the title. This was an electrifying introduction choreographed by the dancer himself, which highlighted his technical precision and elegance.
In Russell Maliphant’s Cut, we were held captive by the dancer’s sharp movements within and between columns of light. Complex spins were combined with controlled hand movements that sliced through the light and shadow. The effect was deliciously mysterious, with a glimpse of a rapidly moving hand here or a perfectly placed foot there, while the rest was barely seen in the darkness.
When the final piece titled Constellation began, I heard a hushed whisper of “Oooh! A magical fairyland!” from my neighbour. Intensely magical it certainly was, as the dancer moved delicately between orbs of soft light that were suspended from the ceiling. It was Odedra’s personal fairyland to which we were privy and by which we were utterly transfixed.
The musical score by Olga Wojciechowska was a truly enchanting accompaniment to this final piece. The smoke and mirrors (and lights) enhanced the audience’s experience, but it was Odedra’s astonishing talent that makes him one of the most exciting performers in contemporary Indian dance right now. His background in the classical dance forms of Bharathanatym and Kathak is evident, as he combines flawless technique with his ability to connect deeply with his audience.
Special mention must be made of Michael Hulls who provided the lighting, as well as the Parramasala committee who made a wise choice when they included Odedra in this year’s programme. For 75 minutes, the audience was indeed treated to the magical fairyland that is Aakash Odedra’s world of dance.