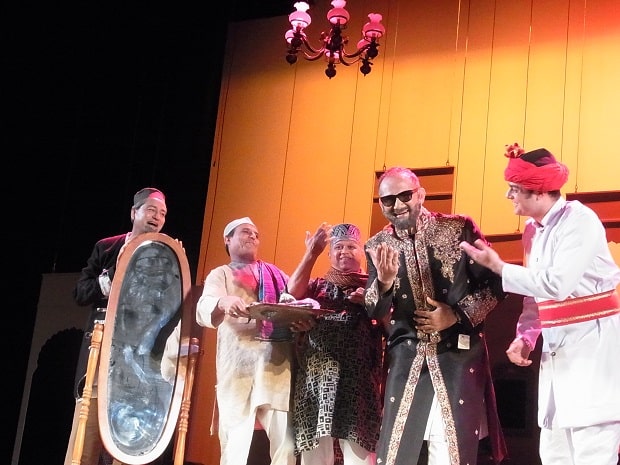 Do parents always want what’s best for their children? Or do they push their children towards goals that really satisfy some of their own wants?

Surely this is a question members of our community, known for their helicoptering and hot-housing, are all too familiar with.

This was but one of many issues addressed in Kanjoos, the maiden production of the community theatre group Adakar.

Presented as part of Parramasala, the social comedy was adapted from Moliere’s L’avare (The Miser), and directed by well-known theatre buff Saba Zaidi Abdi.

The play, performed first in 1668, is based on an avaricious character whose obsession with money render him incapable of having any meaningful relationship in life. His children have to resort to a staged robbery in order to regain some control over their own lives. A double love intrigue and a hilariously exorbitant loan arrangement create the laughs just as much as they allow for the social messages to get through.

The main character’s flaws, so obviously exaggerated, clearly expose the larger immoral qualities evident in society. Beneath the wit lies a deeper social commentary on the hierarchies not only in class structures but also in relationships.

The particular project suits Abdi in many ways, given much of her works are underlined with a social consciousness. And of course, she is adept at creating that Hindustani mood with authenticity.

It was good to see Saba back in action after a hiatus, rekindling that passion that saw her go a long way in her Doordarshan days back in India and indeed, where she first produced the play Kanjoos.

The most remarkable aspect of the recent Sydney production, was its adaptation from the original. Hazrat Awara’s efforts were as true to Moliere as possible, reflecting the skills of the 16th century playwright that continue to resonate. Even the Hindustani setting didn’t seem such a wildly different time and place from the France of the original. As a comedic genius, Moliere has stood the test of time, and has much importance in theatre history. (An Australianised version of his other masterpiece Tartuffe, in a script replete with “crikeys” and “buggers”, concluded a successful season at the Sydney Opera House only weeks ago).

Amongst the players on stage, Amitav Goswami as Mirza, Saba Zaidi Abdi as Farzina and Shashi Dandekar as Dalal Aslam, stood out.

Amitav managed rather well to carry the burden of the play on his diminutive shoulders, imbuing his character with much dramatic energy. One of the best executed scenes was where he primped himself up to meet the girl of his affections, bedecked in that jazzy outfit, scrutinising himself in the mirror. Again, in the famous soliloquy when he learned of the theft his gold pieces, Amitav did not falter once; filled with despair and regret and anger, even anger at his own self, he worked up a sweat as he accused everybody, the audience included, of having robbed him.

But it was Abdi who made the most indelible impression. As the scheming Farzina, she completely owned the role. The dazzling eyes, the facial expressions, the grand hand gestures, the fake laugh, all brightened up the stage whenever she appeared. Just as Moliere intended, you learned to love her, even though you knew she was a mistress of manipulation, playing the system craftily to accomplish her own ends.

Shashi Dandekar was suitably statesman-like, impressing in his role as the straightest of them all and ultimately bringing closure for all. Very much a statesman of the small theatre fraternity in our community, it was a pleasure to see him back on stage after a while as well.

Asif Ghafoor Khan could have brought more life to his role as Farrukh the dandy son of Mirza, but his sheer good looks pulled him through. Ambika Asthana as his love interest Mariyam did not have much to do at all. Sadly, the chemistry between the two was all but non-existent.

In contrast, Aparna Vats as Mirza’s daughter Azra and Vikas Sehgal, her own love interest, were more convincing. Vikas’s Nasir was confident – the male servant and the only person who won, briefly, the confidence of his penny-pinching master. Pankaj Yadav as the incompetent havildar was good too, not at all in awe of the characters with the larger roles.

Nasir Sirguroh and Syed Khurram Qaisar as Mirza’s staff did their bit admirably as well.

The qawwals on stage were a terrific mood-inducer, and for this, one can forgive them their lip-synching skills that were sometimes off the mark.

Much effort, it was evident, had gone into costumes and in the teaching of the correct intonations of the language and the mannerisms of the time and place, and that is wonderful to note. The sets did manage to re-create the old haveli ambience, even though Rajeev Maini’s lattice fences and Indo-Saracenic window frames were all too identifiable from their many previous appearances.

With lighting and sound as well, not much to write home about, but that has perhaps more to do with the nature of the play itself; there’s no real need for special effects as the concentration is squarely on the characters themselves.

The message of it all, hit home loud and clear: one, a morbid obsession with money will leave you with nothing in the end – friendship, love and family harmony are immensely more valuable and desirable; and two, conflicts are resolved when people come together.

Perhaps it is the latter that is particularly significant in current times. The Adakar Theatre Group itself is evidence of this truism, as it brings together diverse communities from the sub-continent and lays bare for all to see, the common ground between us.