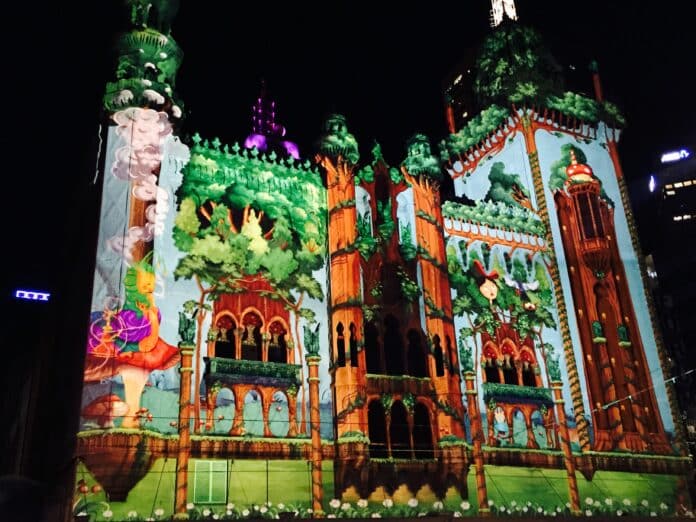 As the most celebrated event in Melbourne, White Night turned out to be a wondrous spectacle.
Celebrating my 21st birthday on the day, I shared the amazing event with some 600,000 other people at this all-night cultural spectacular.
With the inspiration stemming from the international ‘Nuit Blanche’ movement, Melbourne was set to host a variety of exhibits. Conceived in Paris in 2002, White Night is an annual event which aims to make art and culture accessible to the wider public.

Melbourne is known for embracing various cultures and allowing representatives to stage events with visual art, illuminations, music, food, theatre, sport, fashion, film, design and performances on display.
The theme this year was centred on showcasing India’s lush and rich culture to the broader community.

The Yarra River was transformed into a Little India. With varying Bollywood performances, dance routines and music shows continuing throughout the 12-hour festivity, the bustling streets of India were replicated at Birrarung Marr.
With music being heard all the way at Flinders Street Station, the display at Sita’s Garden was remarkable.
Directed by White Night Melbourne’s Artistic Director, Andrew Walsh AM, and co-curated by creative producer and consultant Kate Ben-Tovim and Bollywood star Pallavi Sharda, Sita’s Garden was an experience not to be missed. Melbournians took to the banks of the Yarra to witness a marvellous assortment of art on a floating stage. India’s national flower, the lotus, glowed and blossomed in the Yarra making a picturesque spectacle.
The name Sita’s Garden was decided on by the producers to pronounce an archetypal name in Indian mythology.

“The idea behind the production was to allow the public to immerse themselves in Indian culture,” said Kate Ben-Tovim. Indeed, Sita’s Garden did not only showcase India’s beauty and talent but encouraged the Indian community to understand that Melbourne appreciates their presence and looks to continue the strong relationship into the future.
“We wanted to incorporate traditional and contemporary styles into the program,” Ben-Tovim said.
The floating stage and lotus flowers were inspired by Yarra River itself and its complimentary serenity to the gardens at Birrarung Marr.

Artists and performers including Bobby Singh and Jeff Lang, Jhoom Dancers and DJ Richi Madan, the Kalanjali School of Indian Classical Dance in Taylors Lakes, the Manmohini Indian Dance School in Greensborough and The Bombay Royale band took to the stage to entertain the onlookers.
Interestingly, Pallavi had trained at the Kalanjali School many years ago and she worked with the team to help them have a presence on a national stage.
“We wanted to promote the efforts of Australian-born Indians who continue to respect their culture through song and dance,” Ms Ben-Tovim said.

The audience members were encouraged to join Pallavi and the Jhoom Dancers in a typical Punjabi dance routine, the Bhangra, and learn the moves and expressions.
The festival was well staged for the ICC Cricket World Cup match of India and South Africa on 22 February 2015. With India winning, the community experienced a weekend with India at the top of everyone’s mind.
With White Night Melbourne commencing in 2012 under the Bailieu-led Liberal government, we hope that future governments continue to fund this city-wide event that encourages people to take part in cultural events and activities.