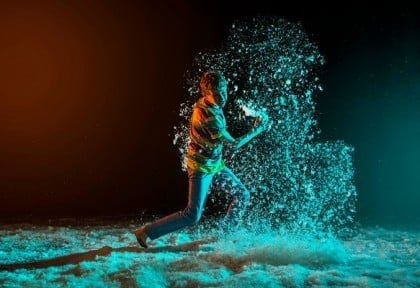 Kaleidoscope – early 19th century: from the Greek kalos meaning ‘beautiful’, eidos meaning ‘form’ and skopeo meaning ‘to look at or examine’. A constantly changing pattern or sequence of elements.

A poetic circus experience, Kaleidoscope will be performed at the Sydney Festival in January as part of Circus City, a collection of shows, workshops, and events showcasing the skill and beauty behind contemporary circus traditions.
The show is based on a book of the same name which follows the story of twelve-year-old Ethan Hugh, a young boy living with Asperger’s Syndrome.
Ethan’s mother wrote the book about her experiences parenting a child on the Autism spectrum, opening up about their daily struggles and triumphs. She described stepping into his world as “the joy of walking through shafts of colour and light; a dazzling kaleidoscope”.
Chelsea McGuffin, the director and producer of Kaleidoscope, met Ethan and his mother through a circus school in Brisbane.

“After I met Ethan’s mum and read the book, I thought ‘We’ve got to make a show out of this! More people need to hear this story,’” McGuffin says.

After several years of development and ongoing collaboration, Kaleidoscope had its first run in April, 2016.
“The show itself is not a story,” McGuffin explains. “In our minds, it’s about a day in the life of Ethan, seeing the ebb and flow of his day and experiencing the world through his eyes.”
Filled with aerials, trapeze, pole work and tissu (aerial silks), along with acrobatics, tumbling, juggling, balancing and cycling, the show is circus for the millennial generation, placing a large emphasis on physicality rather than dialogue. It is about focusing on a complete sensory experience, exploring the beauty that can be found in the smallest things.
“It’s a layered performance,” McGuffin says. “Things are not just as they seem. Each object and scene is layered by Ethan’s thinking and creativity.”

A key element of Kaleidoscope is its presentation as a ‘relaxed performance’, meaning the show is designed to create a safe and welcoming environment for children with disabilities and sensory sensitivities. Performances are held in a supportive and non-judgemental environment with an open door policy and a quiet area available.
“It was a new thing for us,” says McGuffin. “When we launched the show in Brisbane we had emails asking if the show was ‘sensory sensitive’ as a child on the spectrum may often have sensitivity to sound and light. We started to ask how we could make the show more sensitive to these things, which made me nervous, but we realised the show is already like that. We’re already inside Ethan’s world.”
This means there’s not a lot of sound and colour, but instead gentle integration of performance elements. “There are no loud noise changes or bright lights, and colour is only used for specific things; there’s almost a saturation that creeps up on you.”
Though the show will be a decidedly great experience for family groups, “It’s a story that anybody can get something out of,” McGuffin says.
Kaleidoscope features Ethan on stage with another young artist who is 13 years old, and four professional adult circus performers.

“With the casting, everybody is working together with equal roles to share,” McGuffin explains. “Having professionals there to push [Ethan’s] skills and involve him in their acts is a great thing.”
The other young cast member, Oliver, was originally involved in the production as an understudy in case Ethan was unable to perform. After the team realised that Ethan would be an integral and permanent part of the show, a discovery was made which added another layer to their act; Oliver is severely dyslexic and is home schooled because of the difficulties he faced in mainstream schools. He too turned to circus as an outlet.
“It has been really empowering to be a part of this beautiful, unplanned discovery,” McGuffin says. “We’re exploring all these new ideas.”
“It demonstrates how circus can be a platform for other young people to think about their lives and their own self-expression.”

Alongside performances of Kaleidoscope, the adult performers host workshops using creativity to look at circus skills. “It’s about learning from the language of circus, using creative ways to introduce ideas.”
At a workshop as part of the Woodford Folk Festival, children were encouraged to paint the tissu silks before using them. “Creating a piece of meaning in the art changes the way young people approach what they’re learning,” McGuffin says.
For a juggling workshop the team would like to have a room filled to the brim with balls so that participants can immerse themselves in the colour and physicality of the objects.
“It’s about looking at the world through a different perspective,” McGuffin says. “Changing little things in your life can completely change your experience, and often you’ll find it’s something worth opening your eyes for.”
Photos by Dylan Evans