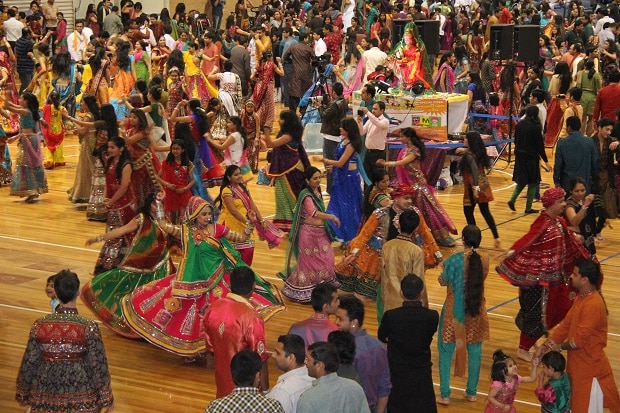 Reading Time: 2 minutesAn Aussie singer and band, unprecedented crowds and loads of prizes made the dandiya show an exciting one

The evening of September 21 at the Whitlam Centre in Liverpool was a festive one, as people dressed in brightly coloured traditional outfits thronged the floor to dance the dandiya and garba to the music of world-renowned music maestro Devang Patel. Organised by Krishav Events, the company’s debut event titled, the Devang Patel Dandiya 2013 created history with a record of 2,500 of people attending from all corners of New South Wales.
“The dandiya was a historic event for many reasons. Apart from the attendance, which was the highest to such an event so far, for the first time ever here, an Australian singer performed in the Gujarati language. It was an instant hit, people absolutely loved the band Electric Korma!” said an ecstatic Chintan Trivedi of Krishav Events, the main organiser of the event.
Electric Korma, a self-proclaimed Hindi-rock band with their own unique genre of music created a sensation at the event, particularly with their rendition of Pankhida o Pankhida. Mr Trivedi sourced the band and was largely responsible for their participation at the event.
Devang Patel and his team performed aptly as expected, with the crowd enjoying traditional and filmi tunes, swirling and whirling to the various rhythms and crescendos of the music.
What was unique and innovative about the event was that it was broadcast live via the Keshav Events’ website, for those unable to attend to view and enjoy.
In addition to the festivities was the offer of chances to win vouchers worth $800 on each ticket that cost just $15, for solar or migration services, clothing, beauty and dinner, and even pizza and panipuri! The catering by Darbar and Annapurna restaurants was enjoyed by attendees, who took time out from the activity to refuel with some mouth-watering Indian delicacies. There was even a professional photography studio at the venue, operated by Evergreen Photography, which could capture special moments for the attendees.
All in all, the event was a grand success, not just for Krishav Events organisers Chintan Trivedi and Pathik Vora, but for all the 45 sponsors who had supported the event. But the main measure of success was through the reaction of the attendees who were happy, satisfied and tired at the end of the show. Mr Trivedi thanked sponsors and volunteers who had contributed to the success of the event. Kudos the Krishav Events for putting up a well-managed traditional event that highlighted one of India’s great festivals and contributed to multiculturalism in Australia.