Keeping her goals in sight 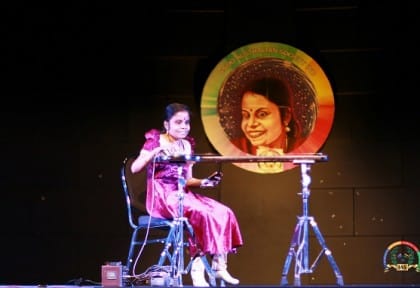 Nothing is impossible. This is a saying we have all grown up with, but sometimes they are just words one sees on a list of inspirational quotes. Yet they ring very true when you come across some inspirational people who jolt you out of your cushy comfort zones.
Like Vaikkom Vijayalakshmi.
Well-known in her native Kerala as the Gayathri Veena Maestro, Melbourne’s Indian community got to see this amazing musician at a recent Indo Australian Society event.


More fondly known as Viji, she was born without sight but that did not keep her from dreaming big and following her true passion. The only daughter of her parents Muraleedharan and Vimala, they are continuing to play a big role in her life. They spotted her talent at the tender age of three and since then it has only been an uphill ride to success and recognition for this soulful singer.
With a fan following running into the millions, Vijayalakshmi is not only known for her melodious singing but for her mastery of the rare single string instruments called Gayathri Veena and Kasu. She has performed at more than 400 shows in all the major sabhas in Chennai, Tanjore, Madurai, Coimbatore and other cities.
Winner of numerous State Film Awards for best playback singing including ‘Ottakku Padunna’ from Nadan, Special Jury Mention for ‘Kaatte Kaatte’ from Celluloid, Filmfare Award for Best Female Playback Singer Malayalam, and 2014 Mirchi Music Awards (South) for Upcoming Female Vocalist of the year, today she has a repertoire of almost 300 ragas, double the number of compositions and a long list of accolades to her credit.
Vijayalakshmi is not only looked up to for her rare musical talent but for her courage in personal life decisions. Although from a traditional family background, she showed gravitas and called off her wedding last year as she was reproached for her disability. The condition put forward by her former fiancé was to give up on her dream of performing, which she blatantly refused. The resulting media and community attention put her in the spotlight, but that did not affect her tenacity and resolve.

In fact she is more determined than ever and is competing for a spot in the Limca Book of Guinness Records for playing the Gayathri Veena for a continuous period of six hours.

Here’s a woman who is strong, confident and totally in control of her life, despite her obvious challenges. Her petite frame belies her ability, humility and courage, and her warm smile immediately draws you in.
Thank you, Vijayalakshmi, for showing us that the only disability in life is a bad attitude, that one doesn’t need sight for vision, and that where there is a will there is always a way.