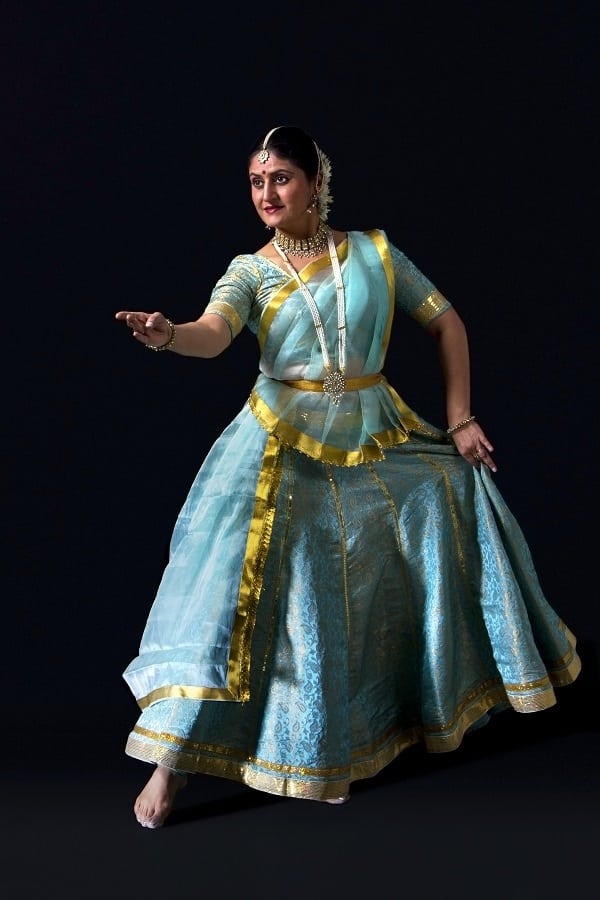 Culture connoisseurs in Brisbane were treated to a spectacular Kathak performance at the Multicultural Centre, Kangaroo Point by internationally acclaimed Kathak exponent Prerana Deshpande recently. She is currently touring under the aegis of Infinity Kathak School.
Kathak is a North Indian classical dance form. The term is derived from the ancient Sanskrit word Katha which means story.  Much like the travelling minstrels of the West, wandering storytellers in ancient India recited mythological tales with appropriate use of melody, rhythm and expression, which led to the gradual evolution of the Kathak dance as we know it today.

Kathak has its roots in ancient Indian temples as well as royal courts. It has survived the march of time through an oral tradition learnt and taught from one generation to the next in the traditional guru-shishya or a master-disciple tradition. It was one such master-disciple relationship that saw Brisbane-based Dr Helena Joshi join Prerana Deshpande’s Nrityadham in Pune, Maharashtra. Each time Helena went to India she would spend at least 4-5 hours of intense training every day under the watchful eye of her guru immersed in dance, having lost track of time. Helena recalled fondly how the dance form’s mathematical precision led to an emotional climax and was a port of entry into a very sublime state of mind comparable to meditation. Helena told the audience that “the annihilating yet sublime” practice routines brought her close to “the realisation of God.”
After a rigorous training regime under the tutelage of Guru Prerana Deshpande, Helena felt the need to further disseminate her knowledge of Kathak in Australia. This led to the creation of the Infinity Kathak School at West End in 2016.

The recital started off by an invocation to Lord Ganesha by Helena with a Tarana which is a musical aspect of Kathak, consisting of a main melody and multiple nuances of rhythm. Dressed in ochre and yellow, Helena’s Tarana was an exposition of controlled grace and sublime symmetry accompanied by a very skilful ensemble. The first half was very much a teaser though. When the curtain rose on the second half, the audience were treated to a very high energy performance by Prerana Deshpande through teen taal, gat and thumri which are essentially portrayals of characters accompanied by highly measured and mathematical beats of the tabla (drum) and other instruments. Prerana also interacted with the audience with grace and humility as she described herself as “a drop of water in an ocean of art as art is far greater than the artist.” She was accompanied on the tabla by Shen Flindell, on the viola by Richard Grantham, Darshil Shah on the flute and Dr Mansi Kinarivala as a vocalist. Dr Richa Dave, as MC, ensured that all the stages of the concert integrated into a seamless panoply of visual and aesthetic delight.
Internationally renowned for her skill and dedication to Kathak, Prerana has been felicitated by multiple awards such as the Gaurav Puruskar by the legendary Pt Birju Maharaj and has many titles conferred upon her including Nritya Shri and the Shringar Mani. Prerana herself was taught by the late Dr Rohini Bhate and excelled by becoming the first student of her guru to gain a Master of Arts from the University of Pune. She also graduated with honours and received a national scholarship from the Government of India for two years. She established the Nrithyadham in Pune, Maharashtra.
Speaking to Indian Link, Prerana said, “In any art form, the reflection of the artist’s individuality and personality makes them a complete artist. Deep knowledge of the art under the guidance of a guru, intense training and true passion are the only ways to achieve it.” She added that she was looking forward to meeting as many Kathak enthusiasts in Australia as possible, through a series of dance workshops organised in Brisbane and later in Hobart, Tasmania.
She exhorted the youth to get to know the culture better by gaining a deeper understanding of this ancient dance form.