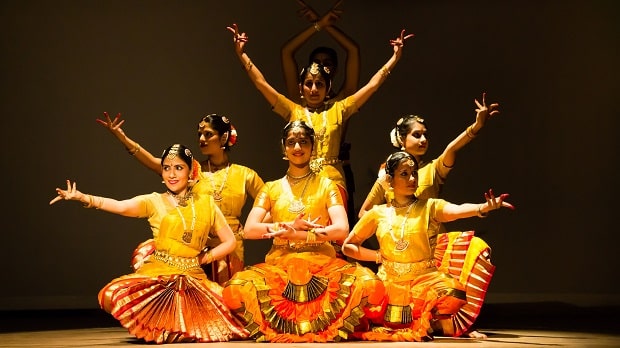 Man’s tenuous relationships within the turning wheel of time formed the basis of Kaalachakra, Hamsa Venkat’s latest Bharatanatyam ballet.
The enchanting production by her Samskriti School of Dance was staged at Marana Auditorium in Hurstville for the Resourceful Australian Indian Network’s (RAIN) annual fundraiser.
The esoteric concept throws up many existential challenges which are not just difficult to answer, but also to understand. Who is an individual, what is their identity, how important are they and where do they fit in the Great Chain of Being? These were some of the philosophical issues that Kaalachakra explored. The three hour long performance, harmoniously balanced the ephemeral with timeless, and mundane with profound, to create an artistic extravaganza that appealed to people of all ages and backgrounds. Kaalachakra was not just a celebration of art, but life itself.
Hamsa’s ability to reach out to her audience and keep them engaged while exploring a subject of this depth and magnitude is especially commendable. The stories (particularly those about sibling rivalry, lifelong friendships and young romance), were aptly chosen and clearly resonated with the audience.
Not only did her selection of texts for the thematic presentations provide variety, the segments themselves were beautifully choreographed and executed. The elaborate preambles and narrative interpolations helped create the mood as the dancers embarked on a creative journey.
“Basically, I feel any art should reach to the core of the human being and explore the creative spirit of those involved while giving to the community we live in,” Hamsa told Indian Link after the show. This is exactly what Kaalachakra achieved, in the process raising over $20,000 for the seniors’ cause.
The music for the performance, both the choice of lyrics and the rendition, was clearly outstanding. High calibre live orchestra has become one of the hallmarks of Samskriti School of Dance. The soulful vocals by Sangeetha Ayyar and Krishna Ramarathinam, supported by Mohan Ayyar on the synthesiser, Pallavarajan Nagendran on mrudangam, Balaji Jaganathan on violin, Chidambaram R Suresh on morsing and Hamsa on nattuvangam, came together seamlessly, setting the mode and tone for the performance. The chemistry between the orchestra on the sidelines and dancers on the main stage was palpable.
Conforming to traditional framework of Bharatanatyam ballet, Kaalachakra was presented in seven segments, each exploring a new facet in the wheel of relationships as one journeys through time, Santhaanam (sacred umbilical ties), Sahodaryam (bonding among siblings), Sishyam (teacher-disciple relationship), Srishti (dependence on nature), Sakhyam (lasting friendships), Shringaaram (innocent romance and sanctity of marriage) and finally, Smaranam (human kind’s communion with their maker).
Each relationship was explored in great detail, offering ample opportunity for the senior disciples to display their mastery over this ancient and difficult art form. Samskriti’s junior students showed no less promise; rising up to the challenges that such a large-scale production demands. Clearly there is no dearth of talent or dedication.
The highpoint of the evening of course was the dramatic centrepiece, Srishti, which probed humankind’s links with the environment. Fittingly, the sun, which is revered in many cultures as the life force, held pride of place in this sumptuous piece. Through the stories of Pandavas, Hanuman, Kunti and Surya himself, the Varnam paid homage to Sun God in all his dazzling glory as he journeys across the horizon. Not only was it a feast for the senses, Srishti tested the stamina and endurance of the performers. Elaborate formations, sculpturesque poses, brilliant lighting, thoughtfully chosen costumes, as well as high-energy vocals ensured that the varnam would be etched in the audience’s mind long after the curtains came down.
In fact each segment had its own unique charm. The opening kauthuvam from Mahabharatha, on Abhimanyu and Chakravyuh, explored how life’s learning curve begins in the womb. Sibling love (Draupadi/Krishna) and rivalry (Krishna/Balarama), lifelong friendships (Tamil padam Pandadithanale Unnai Thoodhanupinen about Valli and her sakhis) as well as devotion and respect of student for his guru (Padmapada/Adi Shankara) are all influential relationships that shape our perceptions, and eventually our destiny. The odyssey of love (the staple of every relationship) was sumptuously told through the immortal tale of Nala and Damayanthi (once again verses from Mahabharatha, which were translated into Tamil by US based scholar Dr Ravi Shankar).
The concluding segment from Thyagaraja’s Naukacharitham poignantly explored ego and man’s relationship with God himself. Quite like a boat that traverses through storm and calm, taking it all in its stride, life is filled with surprises that test the individual’s ability to embrace the good and bad, the beautiful and terrifying, with grace and dignity. Such trials not only shape his character and personality, but also make him realise that he is after all only a small aspect in the larger scheme of being, a drop in the ocean. The lesson that Kaalachakra teaches us is interdependence. The props and special effects (Adrian Van Raay, Muthu Sharma, Rama Vishwanathan, Deepa Gopinath and Devika Krishnamurthy) of this scene provided the perfect backdrop for a breathtaking audio-visual presentation.
In fact, the whole production was thoughtfully conceived and brilliantly executed. A thing of beauty is a joy forever. Hamsa Venkat’s Kaalachakra is a lasting contribution to the Indian Australian cultural scene.