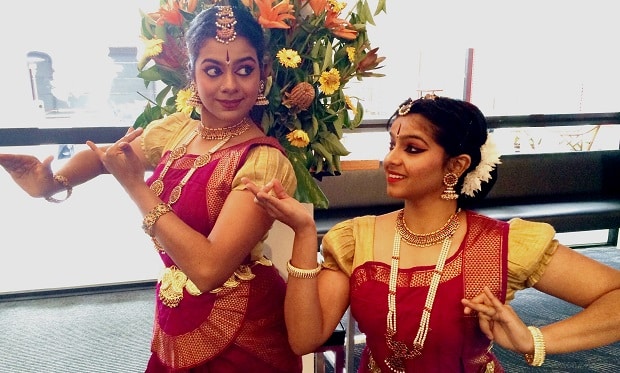 A slightly different approach was taken to the dance component of Sydney’s Parramasala this year. The festival, with Indian performing arts at its core, takes place annually in the western Sydney suburb of Parramatta. This year’s event saw the same high calibre of artists, but with many of the dance events arranged in quick succession on Saturday 18 October at the Riverside Theatre complex’s Lennox Theatre.

The afternoon’s performances began with a dynamic rendition of the classical Indian dance form of Odissi by Raminder Khurana of Mumbai, India. Beginning with a powerful dance on the regal Lord Shiva and the ominous demon Ravana, she then went on to perform another expressive piece and finished the repertoire with a Diwali dance appropriate for the time of year. Vocalist Jatin Shah lent his silken voice as an accompaniment. Khurana captured the audience’s admiration with her vibrant, expressive style and her representation of this ancient art form set a high standard for the dancers who followed.

Cielo Vivo provided an exciting Spanish flavour to the afternoon. Award-wining Flamenco dancer Annalouise Paul, songstress Dahlia Dior, guitarist and composer Robin Morgan and percussionist Peter Kennard delivered a passion-filled collection of pieces that had hearts singing and toes tapping. Their performance was inspired by the poetry of popular Spanish writer Garcia Loca and although the language was foreign, the music and electrifying movements spoke volumes.

Sydney’s Lingalayam Dance Company, headed by well-known dancer, teacher and choreographer Anandavalli, was next in the line-up. A series of compositions on Lord Krishna, romantically titled Lilt of the Blue Hued Wanderer, was presented in the company’s elegant, precise style.

For many, a major draw card was a performance by Bharatnatyam dancer Prof C.V.Chandrasekhar in The Splendour of Creation. One of the greats of the art form, the almost 80-year-old dancer is truly an inspiration to dancers of all genres. That he maintains his wonder, his athleticism, his grace, his ability to adapt to the times and most importantly his joy in dance is evident. In his piece presented at Parramasala, Professor Chandrasekhar described, in amazement, the world we live in and its natural beauty.

The young dancers of Thrayee School of Dance, featuring the renowned Shobanaa Balachandra from Chennai, kept the sparkle on the stage. They performed a delightful and well executed repertoire, including classical devotional pieces as well as a vibrant piece in which two young girls play ball in Mohini Aatam style. Gayatri Krishnamurthy is the founder and director of Thrayee School, based in Sydney.

The string of performances was nicely rounded off by the soulful Chants of Love, by Sydney Qawwali Party and Sufi poets. Elsewhere, the outdoor Park Stage was illuminated by performances such as Sri Lankan dancing, contemporary dance, Arabic sword dancing, Bollywood dancing and an incredibly fun African dance and music extravaganza that had the audience on its feet.

Once again, Parramasala managed to bring people together in Sydney’s west for three days of fun, food and enthralling performances by high quality artists. The fact that many of this year’s performances, including all of the dance recitals were free, was a wonderful and welcome surprise.