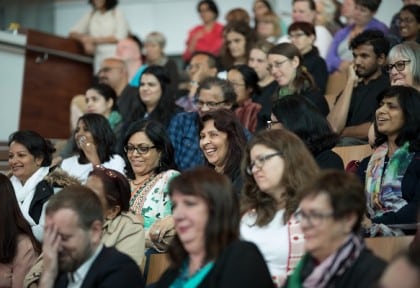 JLF comes to Melbourne and brings its unique and frank discussions on context, culture and history


In the panel ‘Weaving Women’s Narratives’, academic, writer and editor Dr Natalie Kon-Yu chaired a discussion on women’s writing – its framing as ‘women’s writing’, its historical significance, its current relevance. It featured Goan Anglo-Indian writer Michelle Cahill, founder and co-director of ZEE Jaipur Literature Festival and novelist Namita Gokhale, and writer, critic and literary historian Rakhshanda Jalil.
All of them agreed that writing is not, as Cahill said, “itself a gendered process”, but, while they discussed the problematic nature of calling writing by women ‘women’s writing’ (we do not call writing by men ‘men’s writing’!), they also each engaged in very specific ways with women who write and have written. Gokhale declared that “a good story is a good story”, but also that “somewhere, women writers have to remain women writers”. Most vividly, Rakhshanda Jalil pointed to the significance of women’s writing of the past as “opening a window” on their lives, and of the cleverness and boldness of women who wrote of matters of, say, the body, that wouldn’t otherwise be known today.

In ‘Present Tense: Way of the World’, different understandings, his[stories] and counter-[his]stories of colonisation and migration were discussed by John Curtin Distinguished Professor Suvendrini Perera, author and journalist George Megelogenis, economist, author and urban theorist Sanjeev Sanyal and writer and sociologist Supriya Singh, facilitated by 774 ABC Radio’s ‘Drive’ host Rafael Epstein.
From Epstein’s opening question – which, I had to agree with Sanyal was a somewhat absurd no-brainer – of whether the colonisation of India was on balance good or bad, to the more nuanced questions of overlooked his/stories, false freedoms and forgotten narratives, each panelist brought their own experiences and preoccupations to shaping their answers.

Supriya Singh’s argument that Indian migration today is no longer about assimilation, but an ‘agency’ and transnationalism that allows migrants to be ‘global citizens’ brought on Suvendrini Perera’s powerful and timely reminder to us all not to forget the “hardening of borders” that marks today’s world of citizenship and migration, and the 1500 people imprisoned on Nauru and Manus Island.

I had the pleasure of being able to introduce myself to novelist and travel writer Mishi Saran during the JLF launch, and of being able to pounce on her to autograph her book, Chasing The Monk’s Shadow: A Journey in the Footsteps of Xuanzang.
I’m sorry to tell you, however, that I arrived too late, breathless, from the Deakin Edge atrium to listen to the panel she was on, ‘The Untrod Path: Writing Travel’, with Namita Gokhale, British writer and Royal Geographical Society fellow Catherine Anderson, chaired by Sunil Badami. (As an aside, the previous night, at the launch, I was introduced to Mishi as being ‘shy’ – and she immediately responded with, “I’m an introvert.” Oh, for an introvert’s corner, we sighed together.)


I caught the tantalising tail-end of  the panel ‘Gender and the Spaces Between’, the conversation on gender diversity and trans rights between executive director of Transgender Victoria Sally Goldner, multidisciplinary artist Raina Peterson, and transgender rights activist, actress and dancer Laxmi Narayan Tripathi, facilitated by Benjamin Law. Peterson was speaking of the dance form Mohiniyattam, and how the seductive figure of Mohini (the god Vishnu as woman), the inspiration for the dance form, could well be posited as a transgender character.
Tripathi decisively took over to affirm this and go beyond it. “Mohini was the cis-Lord, Narayan who became Mohini…and she is trans, you know. That is beautiful. You can be trans and you can do anything in the world.” This panel encapsulated JLF’s famed ability for bringing us unique conversations – a performing artist who herself bridges different cultural contexts in her work, and transgender activists from two different cultures and gender histories.

The panel ‘The Voice and the Word’ brought together Malaysian-Australian rapper, poet and novelist Omar Musa, poet, novelist and translator Sampurna Chatterji, and Tamil rapper and singer Sofia Ashraf, chaired by writer, editor and broadcaster Jessica Alice. After performing their work (Chatterji rightly pointed out that poetry has always been ‘spoken word’ in India), they engaged in a rounded discussion around poetry and the personal, poetry and the political, poetry and beauty, that made me wish artists weren’t always so confined to ‘literary’ panels.
The final panel of the day was ‘From the Margins to the Mainland’, a conversation between novelist Tony Birch, writers Sudeep Chakravarti and Roanna Gonsalves, and screenwriter and journalist Benjamin Law, chaired by writer and presenter Jamila Rizvi. What emerged was a loose, frank, flexible, breathing discussion around that perennially clenched-fist topic of writing identity.
To some extent, Chakravarti seemed a little superfluous to me here – it was Gonsalves, Law and Birch that pulled me in, probably because as writers of non-Western heritage living and working in Australia, they dove into questions of diversity, writing ‘your’ culture, and the right to present yourself as however you choose no matter what your heritage, all things I struggle with myself as a writer.