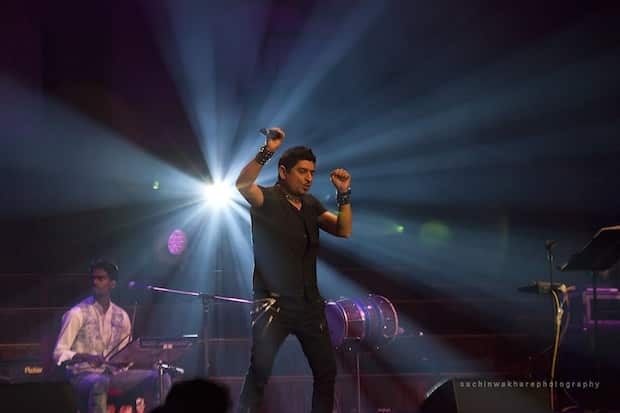 Reading Time: 3 minutesNeeraj Shridhar reaches out to his Sydney fans in his inimitable east-meets-west style

Neeraj Shridhar looked every bit the rock star as he walked on to the stage. Black leather wristbands with studs, metal chains, dog collar, unusual style of facial hair… and of course wildly cheering fans.

He looked like he was all set to rock the house, and that is exactly what he ended up doing.

His particular style of music, which effortlessly blends the contemporary with the more traditional, has won him many fans. The stylised modern treatment that he has accorded to age-old prayer-songs Tum hi ho bandhu and Raghupati Raghav are but two examples of his innovative techniques that have won him so much acclaim. Neeraj, also known as Bombay Viking, is one of the new breed of musicians who has successfully reached out to those on the sub-continent who want the best of both worlds.

Some 1,000 Sydney fans, of all ages, came out this time to sing and dance along with him as he entertained with his very best.

The top five Neeraj Sridhar favourites on any one’s list, were all there: Love mera hit hit, Hey Baby, Prem ki naiya, and several others. Some of his lesser known numbers like Aa raha hoon main and Tera mera pyaar sanam were unusually refreshing and got a great response too.

Shridhar also had the audience eating out of his hands as he narrated many interesting incidents and shared anecdotes relating to almost each number. His stories themselves were enough for us to understand what a genuine artiste he is, and how down-to-earth as a human being. He engaged brilliantly with the audience, even getting off stage and sitting amongst the crowds, passing the microphone along to some thrilled people and even shaking a leg with some.

Surely his banter with the audience that night will be remembered just as much as his music.

Like a true entertainer, Shridhar saved the best for the last; hits like Jhak marke, Twist, Chor bazaari and Tum mile. He seemed to have a huge collection with him and was eager to perform more.

Due to time restrictions however, towards the end it was a rush-rush situation and unfortunately his best numbers like Tumhi ho bandhu and Raghupati Raghav could not be enjoyed to their full potential. He seemed to be in the mood to go on and on but sadly had to be cut short.

Towards the end though he seemed to run out of energy a bit and even confessed how difficult it was for him to pull through some of the high energy numbers! That’s ok, Shridhar; even ageing rock-stars are cool these days!

Luckily, Neeraj had the confident Gorisha supporting him very ably.

Earlier in the evening, when Gorisha came on stage accompanied by all the band members, she had lit up the atmosphere with her strong voice, melodious notes and perfect choice of songs. Her rendition of Senorita was so magical that people were already clapping and tapping their feet. With each successive number she had the crowd eager to shake a leg! And sure enough, soon the aisles were full of people dancing and partying away.

It was a fabulously fun-filled evening, and the fact that this was at one of the most spectacular venues of Sydney, the Sydney Town Hall, made it even more so.

Earlier in the evening, the warm-up acts managed to entertain, even as the show started fashionably late like most Indian shows. The local artistes were a mixed bag with fresh faces and raw talent and some hit number performance up their sleeves. Along with the MCs, they had set the backdrop well for Bombay Viking.

The organisers could easily take pride in the fact that their debut venture was indeed well received. If people’s joy could be a measure of the success of the evening, then indeed it was a hit! The atmosphere was no short of a grand party with good music at a fantastic venue.

In many ways, Neeraj Shridhar is a symbol of what contemporary India stands for; eager to modernise, while still being firmly rooted in its own culture. And if you looked around at the crowd that gathered at the Town Hall that night, that is exactly how they themselves would have come across to you.