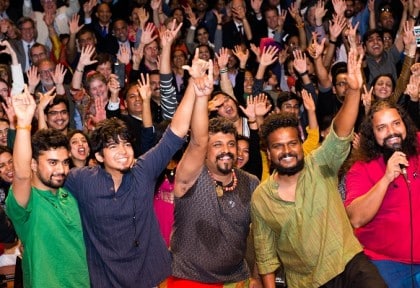 Raghu Dixit brings his Masterplan for Happiness to Perth

A packed Perth Concert Hall witnessed some great music and cultural exchange as the Raghu Dixit Project rocked the room. Dressed in vibrant coloured lungis and kurtas, the band arrived on stage. And one could not miss the ghunguroos on Raghu’s ankles. Confluence Festival of India in Australia could not have had a better kick start in Perth!
As one of India’s foremost bands, The Raghu Dixit Project has blessed music lovers with some earthy, enjoyable music, a perfect mix of folk and rock. Raghu Dixit has come a long way as a singer and songwriter in a very short span. In many ways, his music represents India, and he is unquestionably one of the most-loved live performers India has produced.

The concert started with Raghu’s chirpy questions. “How many in the crowd are from my home State?” he quipped. In fact, the crowd was quite diverse, a true representation of Raghu’s music lovers. In trademark style, he engaged with his audience right from the beginning. He got them talking, and also made them sing and dance as the concert progressed.
A striking element in his shows comes through in his storytelling ability. Raghu’s oratory skills keep his audience glued. Each song had a story and a context which added depth to the music.
The first song of the eve was the blissful, Jag Changa, which can be literally translated as, ‘the world is beautiful’. With a most intriguing acoustic guitar riff, the song set the mood of fun and enjoyment.
Next from their music box was a Kannada song Kodagana Koli Nungita which means ‘Has the hen swallowed the monkey?’ Setting the context Raghu shared, “Many times, when we look around and see things are not going our way, we feel small and inconsequential. It feels like that there is no hope left. When one is cornered this way and thinks that it is the end, a bigger and stronger person comes out and makes the impossible, possible. The song is all about developing that ego and always looking on the bright side of life.”

The amazing musicians who form The Raghu Dixit Project – Gaurav, Joe, AJ, Narayan and Supratik, along with Raghu – then had the audience up on their feet. We were asked to repeat a rather difficult line from one of the songs, Lokada kalaji madatheenanti, Ningyaar byadantara madappa chinti, (you want to worry about worldly pleasures…who stopped you? Worry!) Encouraging the crowd, Raghu allowed us the liberty of pronouncing the words whichever way we wanted, as long as we made it sound like music. The hall burst into laughter at his hilarious comment, but made good effort to sing the line as loudly as possible, and danced their hearts away.
It was wonderful to see the audience, many from a non-Indian background, making up the words, singing and shaking their legs to the peppy folk song Lokada Kalaji.

A melodious song with distinct violin tunes which blended so magically into the song, Gudu Gudiya Sedinodo, was followed by the philosophical Parasiva. Before performing this one, Raghu talked about his struggles and how he literally broke down one day on a scorched Linking Road in Mumbai. He felt like giving up on music when he received a phone call from a friend which brought him his first solo concert break. There was no stopping after that. A wonderful song with the refrain, ‘I have seen Parasiva, the Almighty.’
Next was a Tamil song originally created as a dedication to his mother called Amma. Each time Raghu sings this mesmerising tune, written by Madhan Karky, it feels like he is filling the vacuum of unexpressed love for his mother.
The evening concluded with the very popular composition Ninna Poojege Bande Mahadeshwara. It was this song which brought him closer to the Kannada moviegoing audience, as the tune was used in Psycho, a Kannada film. Again the audience went crazy over the tunes, tapping their feet and waving their hands up in the air, as they sang along with passion.
Photo credit: Manish Bolla, MK Creative Imagery