Arvind Kejriwal is ‘An Insignificant Man’ 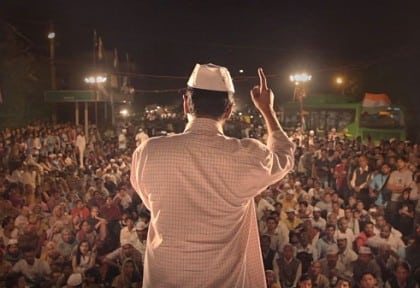 A dramatic yet fully human portrayal of the rise of the Aam Aadmi Party in New Delhi, and an intimate insight into the mind of its controversial no-BS leader Arvind Kejriwal, An Insignificant Man is more absorbing than any political film or fiction, because it chronicles something truly unusual: how self-declared idealists go after and handle political power. We get to be flies on the wall at meetings of the party faithful, get a taste of the very real strategy and cynicism that goes into marketing Kejriwal’s ‘brand’ of politics, and witness the tensions and internal clashes that arise from making promises you may not be able to keep. An Insignificant Man’s storytelling is so successful because both of its sheer narrative commitment (it chronicles the story of the AAP from its very beginnings, to its triumphant win in the 2013 Delhi LA election) and because its subjects, from the earnestly self-righteous Kejriwal himself, to his stylish and charismatic right-hand man Yogendra Yadav, to  passionate and courageous late AAP candidate Santosh Koli, require no script to be fascinating characters.
The two young filmmakers behind this documentary, Khushboo Ranka and Vinay Shukla, spoke to Indian Link about what went into making it.

How did this film come about?

Vinay: We felt a need to engage with the political reality around us. Every day, you switch on the news and there is so much that bothers you and concerns you and yet there is so little political art that we see out there, especially in India. The conventional news coverage around most issues is rather knee jerk. We wanted to take this burning issue of whether idealists can ever be successful politicians and take a more meditative and longform view of it. When the AAP started out, people were really divided on whether it was a good decision or not. We decided to get out of our homes in Bombay, move to Delhi and follow these guys with our cameras.

What difficulties, if any, were there in getting the AAP and Arvind Kejriwal’s permission to follow their journey so closely and intimately?

Khushboo: We approached them in late 2012. They were just starting their new political party and nobody really thought that they had a chance. Nobody was interested in them so they were more than happy when we showed up with a camera every day. That’s how it all started. Slowly, they began getting more popular and the story became much bigger than anything we could have imagined.

As filmmakers, what appealed to you about Kejriwal, Yogendra Yadav, and the other party faithful as subjects? What was it about the story of the AAP that struck you as being something you wanted to offer an audience?

Vinay: The AAP story allowed us to engage with politics anew. Here was an absolutely fresh political party – full of idealism, vigour and contradictions. Through their journey, we were able to get a glimpse into what it means to be a political party and fight an election in New Delhi. Arvind and Yogendra both represent the duality of our political needs in today’s times. We screened the film in Spain recently and the audiences there identified with the film completely since they could associate it with the Podemos movement. It’s amazing how the AAP story coincides with the political currents across the world.

What was the experience of filming like? Were there any challenges?

Khushboo: There are many challenges to making political art in India. One is of course institutional alienation. We didn’t have much support as first-time filmmakers while making the film. So even while we received an incredible amount of support from the public through our crowdfunding campaign, there are several Indian institutions who loved the film but wouldn’t support it publicly. And of late there have been so many Indian festivals who said that they love the film but can’t program it because of the pressures they are facing. At one of the Indian festivals in the US, the programmer had to come out before the screening and give a disclaimer because some people disapproved of showing our film.

Is this film a study in idealism and its relationship with politics, as much as it is about an ‘insignificant’ man’s rise?

Khushboo: Yes of course. We’d like people to think more deeply about the mechanisms of politics and how power operates around them. We live in an extremely polarised climate and I hope our film will be a moment of pause and reflection on our function as citizens in modern politics.