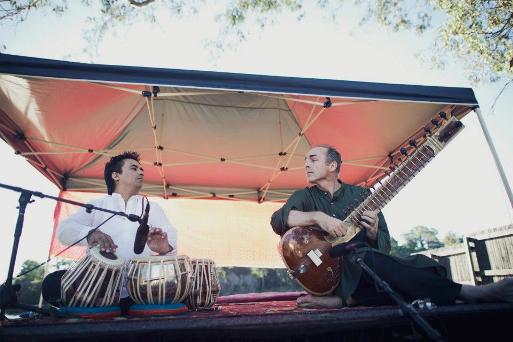 The week-long Encounters India festival was presented Queensland’s Conservatorium Griffith University from May 13-19. The festival is held every two or three years, to celebrate cross cultural music and arts in Australia, and this was Brisbane’s fourth Encounters India event.

Bhajan fusion
Darkness descends, there is a chill in the air, expectations run high on the evening of Friday, May 17 at the bustling Queen Street Mall in Brisbane. Spectators huddle around a stage waiting in anticipation to witness ‘India in the City,’ a cultural event that is part of the Encounters India festival. The event kickstarts with devotional music by the Sahaja Sangeet group, the chanting of Om resonates through the Mall. A spectator Jasleen whispers, “Close your eyes, feel this music vibrating throughout your body!” I do and the music not only exuded warmth on this cold evening, but also positive vibrations.
Sahaja Sangeet is a devotional music group of Australians and Indians who came together through the Sahaja Yoga organisation in Brisbane. “We are self-taught, and can sing in Sanskrit, Hindi and Marathi,” says Peter Hewittson, of the group.
As the evening progresses, the audience is involved and enthralled with their foot-tapping bhajan Udhe ho, even down to the hand gestures required for the chorus. “This band is great, their song changed the vibe of this vibrant business-like mall. Especially as Friday is a holy day for Hindus, it is good to hear sounds of holy chanting echoing through the mall,” says Sharminee, a spectator.
The second performance of the evening was from Brisbane Bliss, a youth group with Australians, Nepalese, Indian and even a Mauritian, who came together during Satsangs at the Art of Living Foundation. With the use of modern instruments like the guitar, bjembe (African drum) and a tambourine, traditional Sanskrit bhajans become peppy and energetic and are enthusiastically applauded. Says Brett Kneebone of Brisbane Bliss, “As a band we try to connect to the youth and the young at heart, combining elements of popular rock music”. The band has been performing for over two years at various festivals and community events.
Although the event lasted for only an hour, it has pumped up the crowd. “This has been a wonderful event, very heart-warming and I can feel the joy in the air,” says Pam, a spectator.

Authentic Indian bazaar
Aunties dressed in saris and salwar kameez were seen all around South Bank, an uncommon sight in Brisbane. Long queues at enticing food stalls, curious crowds trying to understand the right concepts of meditation and yoga, while at the other end of the bazaar, onlookers watched Indian cultural performances. The fragrance of butter chicken, scrumptious dosas and spiced tea wafted in the air at the Indian bazaar, held at the cultural forecourt South Bank, Brisbane on May 18-19. As part of Encounters India festivities, this bazaar was expected to offer a feel of authentic Indian street life featuring food, crafts and clothes, yoga and mehendi.
“I wish I was in India right now. The music and dance have created new impressions,” says Synne, visiting Brisbane from Norway. Ekta Shah reminisced on her days in Delhi saying, “I was expecting chaat and more rangeele (colourful) moments inherent to India here, but nevertheless it’s good to see different cultures embracing our Indian heritage through this bazaar”.
Strolling along, my eye catches an extremely colourful stall titled Earthlink which strongly believes in the philosophy of  ‘Sharing Cultures, Educating Children’. The stall had colourful craft and toys ranging from hand and finger puppets, educational games and story telling kits to name a few. Proprietor Sally Eberhard says that the business was set up in 2003, and the toys are educational to assist early learning. Sally has a long term interest in supporting fair trade, sponsorship and fundraising to help people in developing countries. “Our crafts are sourced primarily from India and Bangladesh, few of the items are from countries like Peru, Cambodia and Thailand,” says Sally.
She further explains that India and Bangladesh produce beautiful and colourful varieties of toys and most importantly, quality which appeals to her niche market for early childhood. Sally sources her products from a fair trade co-operative based in Kolkata, which has items from different states like Gujarat, Rajasthan and Orissa.

Bollywood flash mob
At the bazaar on May 18, suddenly the popular track Chance pe Dance begins booming on the speakers. Racheal Leigh, a choreographer and a dance instructor takes the lead and starts dancing solo, with over 35 onlookers and people sitting in the crowd gradually joining in, grooving to the music. This is probably the first Bollywood flash mob witnessed by Brisbane.
Racheal runs Bollycise, a dance fitness program and also Bollywood dance classes. “I learnt Bollywood dance steps through songs, and it is easy choreography,” she says explaining that her love for Bollywood began when she was part of a play that travelled around the world. One of the scenes was of Bollywood, and that triggered a passion for not just Bollywood dancing, but other classical dance forms. “I have never visited India, but I have been trained in Bharatnatyam and Odissi by my teachers in Brisbane,” says Racheal.
When asked if she has been planning the flash mob for a while, Racheal quips, “I have always wanted to do a Bollywood flash mob, and Encounters India was a good platform to perform”. Racheal had posted details of the flash mob on various social networking sites, and the response was overwhelming. “There were people from different cultures who wanted to be part of this mob, and we rehearsed for only an hour in the morning of the event. A few more joined in later, quickly learning the steps a few minutes before the flash mob,” she explains.

Beyond Bollywood
Another cultural extravaganza held on the evening of May 18 at South Bank was ‘Beyond Bollywood,’ at the Courier Mail Piazza. The initial delay didn’t seem to faze the crowd, they were soon enjoying the show, humming the tunes of the 90s classic hit Papa kehte hain from the film Qayamat se Qayamat tak. Sung by Yusuf Ali Khan, with a background score by an Australian orchestra band, it was a hit. Next is the Brisbane Babas Band, with the crowd dancing to their fast paced Punjabi song Munda hogaya crazy. The bhangra does not stop here as black and white taxicabs make a grand entrance at the Piazza where the Sher-E-Punjab bhangra dance group jumps out and runs onto the stage. Dressed in colourful bright outfits, the group pumps more energy into the crowd with their dancing.
As the evening progresses and the night air gets chillier, more Indian dance forms like the Bharatnatyam, Mohiniyattam, Kathak and Garba are performed by all age groups.
“We have so many Indian functions in Brisbane, but most Australians are still unaware about our culture,” states spectator Shobha Nettur, making a valid point. “We need to get more Australians involved and spread the word of future events through mainstream media and radio stations”.