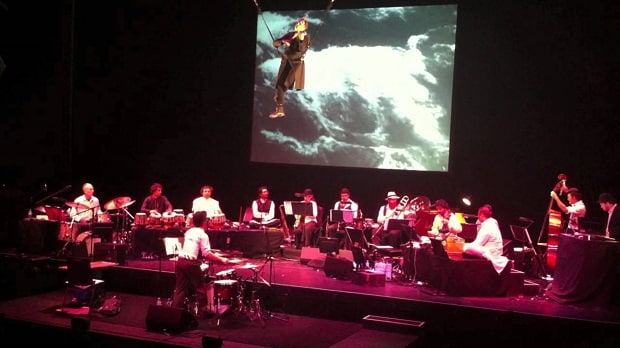 Long before India opened up its shores to global market forces and certainly well before Bollywood became an international phenomenon, a fearless young Western Australian woman charmed her way into its hearts and homes. Liberalisation and bi-lateral trade were decades away. Free-spirited, self-made and ahead of her times, this daring woman rose from being a virtual non-entity to a celebrated Bollywood icon.
Meet Hunterwali, aka Fearless Nadia (born Mary Evans), best known for her roguish charm, swashbuckling heroics and death-defying stunts. The silent era film goddess was the ‘tough-talking, whip-cracking, action heroine of Indian cinema in the 1930s and ’40s’.
Her lasting contribution to Indo-Australian cultural scene was celebrated at Parramasala 2013, with an electrifying performance of Ben’s Walsh’s Fearless Nadia. The multimedia spectacle, which debuted at Adelaide’s OzAsia festival last year, was screened in Sydney for the first time. It has also successfully toured major metros in India.
“Fearless Nadia is a wonderful paean to Bollywood and a great night of music,” Festival Director David Malacari stated at the launch of Parramasala 2013.
“Nadia’s biffing and boffing of assorted baddies is great fun, but the music turns it into a must-see event that was a huge success in Mumbai, the home of Bollywood,” he further added.
A world-renowned drummer, Walsh who fronts the eclectic international band Orkestra Of The Underground, entertained audiences with an adrenaline charged live performance at Parramatta’s Riverside Theatre.
Featuring 12 Australian and Indian musicians, including Sandy Evans, Shenton Gregory, Bobby Singh, Greg Sheehan, Sangeet Mishra, Sudhir Nayak, Aneesh Pradhan, Vinod Prasanna, Kim O’Sullivan, Matt Ottignon, Eden Ottignon and Daniel Pliner, Fearless Nadia is a musical collaboration steeped in history. The ensemble incorporated the sounds of the tabla, sarangi, dholak, Indian flutes and harmonium and combined it with the trumpet, drums, violin, clarinet to make up a spectacular soundscape, with Kathak dancer Shruti Ghosh also taking centrestage.
Paying homage to 100 years of Indian cinema (nowadays better known as Bollywood), high voltage percussions, gravity defying acrobatics by viola player Shenzo Gregorio, slapstick acts by Walsh and Greg Sheehan, and an original score, were some of the added extras as audiences were once again treated to the daring exploits of Nadia.
High-energy visuals from Diamond Queen (1940) have been painstakingly edited and collated by Walsh for Fearless Nadia, before being transferred from its nitrate original to digital format.
“For me, the project is a true labour of love. I have always enjoyed the world of the silent film as it lends itself to the potency of live music,” score composer Ben Walsh told Indian Link after the live performance.
“Dusting off the cobwebs of a nitrate film and infusing a new energy into the movie was an enriching experience,” he added. “I am truly grateful to Roy Wadia (Wadia Movietone) for trusting me with his family legacy, and believing in me the whole way. For me it was a great honour to bring history from the vault and into the world once more”.
Walsh, who has been to India several times, first met Wadia in Mumbai while on a concert tour. The chance meeting led to the idea of reincarnating the body of Nadia’s work. The storyline, action and comedy of Diamond Queen instantly appealed to Walsh.
“The action, romance, drama and also the political aspects spoke to me instantly when I first saw the film,” he reminisced.
“I could instantly hear the score!”
Elaborating on the background music, Walsh spoke about how the strong Indian and Australian elements have blended into a harmonious mix. “The Indian system of melody and rhythm have been skilfully married into pronounced Jazz elements,” he explained.
“For me it is a theatrical reinterpretation. The music drives the emotion and in turn, the scene itself. And having a live orchestra engages the audience like never before. As a director, I believe I have redirected the whole movie itself. I have put my heart and soul into this black and white world of kooky characters and iconic heroines,” he added.
Fearless Nadia also included passages of solo tabla composed by Aneesh Pradhan.
As the music came alive, the audience was in raptures, enthralled by the whole sensory experience and transported back in time to the world of the swashbuckling 40s, willingly suspending their sense of disbelief. It was a night to remember.