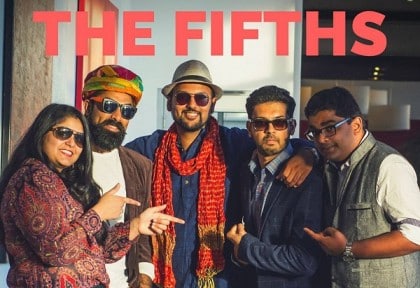 DHANYA SAMUEL catches up with The Fifths, a music band wowing the crowds in Melbourne’s Indian community

Electro Pop Bollywood. That’s how they describe the music they make.
A surprisingly refreshing music band, The Fifths are all set to change the live Indian music scene in Melbourne.

The Fifths, as the name suggests, has five members. There’s Rohan with his smooth delivery of vocals that comes from his background in Shastriya sangeet; Aditya, who is a self-taught musician with a powerful voice; Harsha whose artistry ranges from playing the guitar to music production; AP on the drums and percussion with her impeccable timing, otherwise known as Dhol Baby, and Sarang on the keyboards with a background in classical piano.
“As our friendships deepened, the personality of the band emerged and our style of music started taking shape,” reveals Sarang.
They initially met while performing at community shows. Their shared passion for music soon bought them together as a group and the band started performing at small events and parties. More recognition came their way when The Fifths began performing support acts for music artists like Udit Narayan and Lucky Ali who were touring Australia.
Inspired by the growing public acceptance that no doubt gave them a boost in confidence, The Fifths finally began to create their own music. They have just announced the launch of their EP featuring some of their original tracks on 22 June at The Toff in Town (252 Swanston Street, Melbourne).
The Fifths draw inspiration from various sources when it comes to creating songs for their albums. From AR Rahman and Coke Studio to The Beatles and Beethoven, their style of music is varied and a tribute to musicians, artists and composers they like best.

Speaking to Indian Link about their experience performing live in Melbourne, the band members say that the incredible cultural diversity and vibrant music scene of the city is highly invigorating and inspiring.
“We have performed at a number of iconic venues around the city; the people in Melbourne have proven to be very open to Indian music,” Sarand observes. “We daresay that a number of Aussies have become our ardent followers! This is why we are proud to call Melbourne our home. Having said that, live Indian music is not as prevalent in Melbourne as music from other cultures, throwing the door wide open for other Melbourne-based Indians who share similar aspirations as us.”
While every performance is a memorable one, their recent one at White Night 2017 turned out to be a standout one. There was visual extravaganza with colours, lights and theatrics and The Fifths were thrilled to perform on such a huge platform.
Team effort and time management plays an integral role in the sustenance of any band. With full time jobs, family commitments and bills to pay, a balance has to be maintained between the music and everyday life.
“We generally meet once a week and additional meetups are scheduled when necessary, e.g. recording a new song in our studio. Technology plays a huge role with WhatsApp ensuring that there never really is a dull moment in our lives outside the band.”

The musicians have a lot of dreams and aspirations for their band. It might take a lot of hard work and perseverance but one day, they hope to have the crowds flocking to see them perform at the Sydney Opera House or Royal Albert Hall, London.
For budding music artists out there, The Fifths have only one piece of advice. “Music is a universal language, so don’t be afraid to communicate your distinctive style to the public.”
Also, get involved in the local music scene as much as possible and don’t undermine the importance of social media.
Follow The Fifths on www.facebook.com/thefifthsmelbourne