How Benyamin touched the world 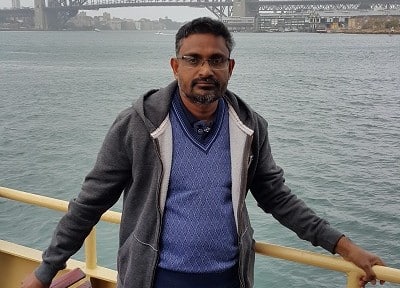 A Malayalam novelist, honoured in an Australian list of writers, pays a visit

It was a cold winter night in Sydney when Malayalam writer Benyamin welcomed a group of keen followers. “Thank you for coming over to listen to a writer, in these times when most people disregard writers and books,” he said.
He was on a visit to Australia to interact with his readers in various parts of the country.

His widely acclaimed book Goat Days (Aadu Jeevitham) was chosen by SBS Radio as one among 40 ‘to be read’ books from around the world in 2015.
The mononymous Benyamin is well-known in Kerala especially after he became an overnight sensation with Goat Days. (He was born Benny Daniel and is now based in Bahrain).
Celebrating its 40th anniversary, SBS last year compiled a unique list of books from around the world. On this list, Benyamin shares the honours with other writers from the subcontinent like Vikram Seth, Waris Shah, Tiruvalluvar and Intizar Hussain, besides others from around the world.
When asked about how he sees this recognition from Australia, he told Indian Link, “It is interesting that in this new world, regional Indian literature is transcending the borders set by nations and languages. This also proves that people of the world have started acknowledging the literary works from the linguistic minorities.”

Originally published in Malayalam in 2008, the book so far has printed a hundred editions, making it the most widely read book in the language. Categorised in ‘diaspora writing’, it profiles the life of Najeeb, a Keralite who migrates to the Middle East dreaming of a better life. In an unfortunate turn of events, he ends up herding goats in the middle of the desert, employed by a cruel Arab. This book, which is divided into four parts Prison, Desert, Escape and Refuge, narrates a life of dreams that go astray.
The book captured the attention of readers worldwide when it was long-listed for the Man Asian Literary Prize, and short-listed for the DSC prize for South Asian Literature. Subsequently, it was translated to Arabic, Nepali and Thai languages other than English and Indian languages like Tamil, Kannada and Oriya. Having written many other books, the author thinks that the wide acceptance and the critical acclaim he received for this book was because it outlines a universal story that can be identified by people worldwide.
What gratifies him today is the acceptance the book received from some of the most unexpected corners. “I am happy that the people of Arabic origin did not put it against them. Instead, they saw it as something that could fuel the improvement of the social set up of the Middle East countries.”

He continued, “The officials of Abu Dhabi, when asked by an American university for 10 books that could be used to best learn about life in Arab countries, suggested Goat Days as one.”
The book was also well-read and discussed at the writers’ festivals of Karachi and Dhaka, where the people could relate to the circumstances described in the novel.
In Australia, we might see him again soon, as a literary exchange program organised by the Australian universities is on the cards too.
One of Benyamin’s best recollections in regards to his readers’ feedback is as follows. He was woken up by someone at 2am one night, and asked if he was sleeping. When he said yes, the man at the other end of the phone said, “I can’t sleep after reading your book. You shouldn’t be sleeping too!”
Chuckling, Benyamin recounted, “I was annoyed at that point, to be honest, but upon second thought, I was sure this is the impact that every writer wants to create on people and society.”