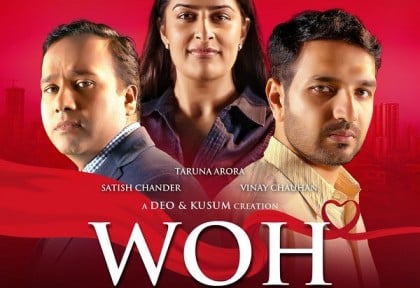 On the breakup of her marriage, London-based Costina (Taruna Arora) returns home to Melbourne and gets involved in rebuilding her father’s business. It is here that she learns of the huge positive contribution which was made by Satyajeet (Vinay Chauhan), the ex-Manager of her father’s immigration consultancy firm, in expanding the business and creating a great fun-loving team. Costina is however surprised that though Satyajeet is the prime suspect for the murder of his Australian mother-in-law Margaret (Rosalind Holz), he continues to have a very loyal following amongst all the employees. Intrigued, Costina explores more and learns that consequent to the murder of Margaret, Satyajeet has lost his mental balance and is lodged in a mental health facility. Costina helps in Satyajeet’s recovery and solving the murder mystery. The story of Woh is also however liberally sprinkled with humour, romance, love, compassion, care and trust.
In the past, several Bollywood super hits such as Salaam Namaste, Dil Chhata Hai and Major Saab have been shot in different locales of Australia. These movies revolved around Indian issues and had established actors, and professional crew. However, Woh is a Bollywood type of movie shot entirely in Melbourne downtown, its’ beautiful suburbs and the scenic surrounding hills.  Besides this difference, Woh focuses on the integration of immigrant Indians, Fijians and those from other countries into the Australian mainstream. Also, unlike other Bollywood movies, first-time producers, the Endeavour Hills based husband-wife pair, Deo and Kusum have given a chance to first-time, Melbourne based actors, singers, lyricists and production crew so that their talent are effectively showcased. For this novel attempt, Deo and Kusum need to be applauded.

As for the story, though taut in the first half, it loosens its grip in parts during the second half but is saved by dollops of comic interludes, enacted effectively by playboy Shekhar (Ankush Jindal).
In the acting department. Vinay Chauhan excels in his role as the mentally disabled murder suspect. Ajay Gupta, in his short role as Costina’s father and Kusum Narayan, as the radio presenter also impress.
Some of the songs are very hummable, especially the title song Oh Guruji and Halka, halka. With devotional songs (bhajans) also thrown in, these may appeal more to the elderly audience.
The subtitles have been worked upon intelligently – capturing the essence and yet not sounding clichéd.
If there is one thing which entirely stands out, it is the superb cinematography by the first-time Director of Photography, Christopher Jarocki. Be prepared to be wow-ed by ever frame, frame after frame.
For all immigrants and their families from the Indian sub continent and Fiji, Woh is a must watch – at least once.
Premiered to a packed house in Fountain Gate Village Cinemas on 19 February, Woh is to be soon screened again in Knox Cinemas in Melbourne and also in Sydney, Brisbane and Suva in Fiji.