Homage to the grand master 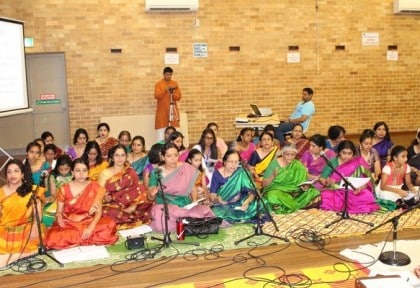 It is no exaggeration to say that where there is Carnatik music there is Purandara Dasa (1484-1564); his compositions are sung even today. No Carnatik music performance is complete without a Purandara Dasa composition. Five hundred years after his passing, music aficionados continue to be inspired by this great master, worshipped as the ‘Pitamaha’ of Carnatik music.
Purandara Dasa composed as many as 470,000 Devaranamas (devotional pieces) in Kannada. In these, Krishna danced to his compositions; the essence of Vedas and Upanishads were offered in a easy-to-understand manner; he rebelled against meanness in individuals, and sermonised about righteous living.

As well, another great contribution of Purandara Dasa is that he taught us how to teach music, as an early musicologist. Before him, there was no scientific way to learn music. He introduced Sarale Varase, Janti varase, Alankara and Pillari Geethe as the first lessons in the instruction of music. The practice is followed to this today.
It is no wonder then that musicians continue to come together to pay homage to him.
In Sydney it is unique that the musical scene for the calendar year opens with Purandara Dasara Aradhane. This took place this year in late February, at the packed to capacity Ermington Community Hall.
The day started with the seniors and the beginners rendering Pillari Geethes – Lambodara and Kereya Neeranu. This annual tradition involves a group rendering of Sri Purandara Dasa’s Nava Rathna Malika, a garland of nine of his gems including Jaya Jaya, Adidano Ranga,  Sakala Griha Bala, Odi Barayya, Kallusakkare, Pogadirelo, Krishna Murthy Kanna Munde,  Bandanene and Indinavara,  set to impressive ragas – Nata, Arabhi, Atana, Bhairavi, Kalyani, Shankarabharana, Kambodhi, Sri and Suruti.

It was a delight to hear some 50 singers presenting these items in unison.
The dais was then handed over to beginners of music who performed in small groups. The confidence that they exhibited in their Harinarayana, Kandena and Tharammayya is to be admired.
In Sydney’s Carnatik music community, Purandara Aradhane has been typically themed to bring out some of the rare compositions of the master and avoid repetition. The theme prescribed for this year was ‘Nava Rasa’. Accordingly, elders in small groups presented compositions which portrayed the nine emotions of Hasya, Karuna, Raudra, Veera, Bhaya, Bibhatsa, Adbhuta and Shanta.
Lakshmi Abhishek gave a brief introduction to the nine rasas. Some of the great compositions of Purandara Dasa were delivered in abundant variety, including Carnatik, Hindustani and light music. Some brought out the melody while some others exhibited their superb craft. One heard both familiar and lesser known kritis – Jagadodharana, Agnyaanigala Kooda Aadhika,  Tirupathi Venkata Ramana, Karuniso Ranga, Alli Nodalu Rama, Anjikinyatakayya Sajjanarige, Hanumantha Deva Namo, Veera Hanuman, Keleno Hari Thaalano and Bhagyadha Lakshmi Baaramma.

With these thoughtfully picked numbers, the message Dasarendare purandara dasarayya was effectively driven to the gathering.
It is admirable that there were as many as 106 participants and indeed that this activity has been practised continuously for 16 years in Sydney. The organisers deserve our congratulations.