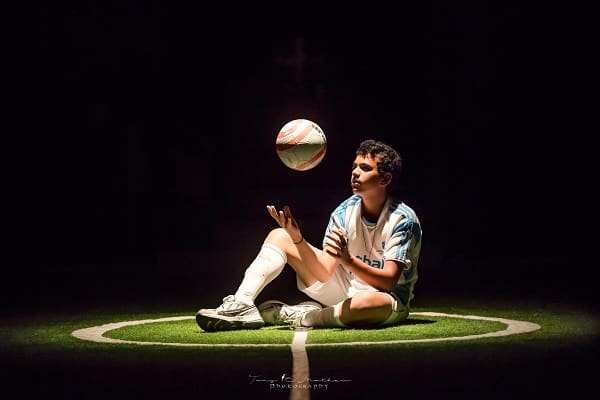 Reading Time: 4 minutesFr Geevarghese is a priest in a small parish in Southern Delhi, who unwittingly gets entangled in the tumultuous life of a tribal girl called Lucy Marandy, a devotee in his parish, who’s being hunted by an evil trafficker, Jabbar. In an unexpected turn of events, the priest becomes her saviour, rescuing her from his clutches. Quite a predictable storyline, one might remark.

But the priest in Sasidharan Naduvil’s play Higuita looks towards Rene Higuita, the Colombian goalkeeper of 1980s for inspiration – and therein lies the difference.
Higuita was known for his unique style of playing; where he as a goalkeeper shouldered more responsibility and risks other than guarding the goalpost. Right from undertaking dribbling runs to multiple attempts to score goals, he has done it all to be nicknamed the ‘sweeper-keeper’.
“This is what our protagonist is doing too,” explains Naduvil, the director who did a freestyle adaptation of the renowned Indian writer NS Madhavan’s short story by the same name.

Naduvil has been staying in Canberra for the past few weeks to train the local amateurs to do this play, as part of ‘Ochre Theatre’, formed by a group of Indian Australians. “Every man is a prisoner of the boxes of his own making. When he steps out of the boxes to do something, it will certainly make a difference. The goalkeepers are like caged birds under a burning sun but Higuita is a goalkeeper who steps out of this cage. It is this concept that makes this play relevant in today’s world,” he adds. “The world is disintegrating, and we need to curb this fire that is on us. It is high time every person steps out of their own shell, to bring about a change.”

Naduvil is a theatre activist with 35 years of experience, and has to his credit around 400 plays in India; he’s won the best director award around 300 times in a variety of arenas and regularly stages his plays in Mahindra Excellence in Theatre Awards in Delhi, and in World Theatre Olympics.
Interestingly, the play is set in a football court, and the artificial turf of 20mX12m forms the centre stage. Only four spots on the turf are lit up with spot lights, depicting the various boxes that the humans are caged in – the two goal posts, the centre circle of the football ground, and the spot in the front, which is set as an altar.

“I must say here that my inspiration is the Austrian writer Peter Handke’s novel, The Goalie’s Anxiety at the Penalty Kick. This whole play has been interspersed with the game of soccer, to emphasise the emotional connect the protagonist has with the game, and Higuita himself,” continues the director.
Reeve Abraham, who portrayed the young priest was a delight to watch for the life he added to the character. The phenomenon that left the audience spellbound, however, was chorus work in the play. The game of soccer, the uprooting of the tribal houses and the celebrations while sending little Geevarghese for ordainment were marvellous.

Joy Paliakkara, a keen audience member agrees, “That perfect blend of light and darkness and the amazing stage choreography enhanced the visual impact of these scenes to compare it to an onscreen work that gets finalised after heaps of technical refinements. And here it was, right in front of our eyes, enacted live. Unbelievable!”
Basking in true Australian multicultural spirit, it was done in multiple regional Indian languages, as well as in English.

“The power of the art form is not displayed when a lonely scriptwriter pens down some high punch situations, but when it is given life and blood by real people in the society. The idea transcends borders and triggers the thought process in everyone. Eventually, that is how a play becomes successful,” concludes Naduvil.
Photos: Tony C Mathew