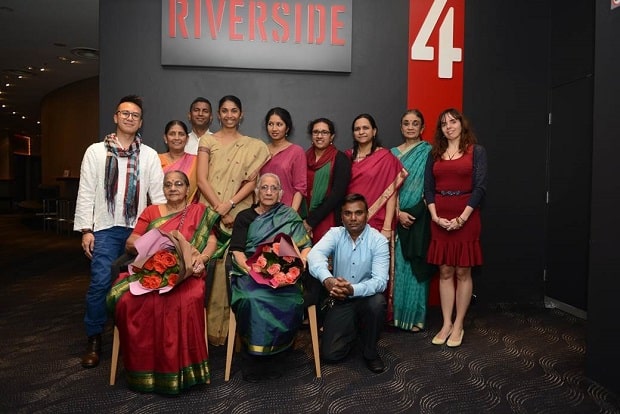 Reading Time: 4 minutes“Nobody has ever asked me about my music before”

‘Her Inner Song’ is a short film, a digital time capsule that captures the personal musical journeys of five women over 80 years.  It is not the story of sisters, mothers or aunts but of  women who bore the restrictions of orthodoxy and cultivated their music.  They now gracefully give us a glimpse of classical music and dance over 85 years.

‘Her Inner Song’ premiered on 31August at the Riverside Theatres in Parramatta. Fully booked weeks prior, it showcased intergenerational musical tradition with live performances by the women and their families, followed by the screening of the documentary.

One could feel the emotions within the audience whilst viewing the film. The women’s stories evoked joy, laughter, and sadness, as the audience walked with them through their life stories.  These quiet achievers made us proud for they kept our culture alive even while others tried to hide it.  They found inner satisfaction in their music.

“Phenomenal effort and a joy to watch. Finally, an authentic voice (or voices) to share real stories.”

The film offers a glimpse into a world of grand sabhas, curtained radio recordings and the historical bindings of orthodox traditions, which revered their music, even as they prohibited its public performance by women. Each of these women’s stories is different, and together they begin to illuminate something about music, history, and society through women’s eyes.

“In addition to the emotion packed content, what I loved about the short film was the spontaneity with which the ladies expressed themselves, no artifice there at all, straight from the heart, just like their music. Still chuckling over the ” vellaiya kozhu kozhu mama” coming to teach. Absolutely delightful.”

The five women who participated are all over 80 years of age, and live in Sydney: Smt. Swarnam Naganathan, Smt Bhagirathi Narasimhan, Smt. Rajalakshmi Venkatachari, Smt Bhuvana Venkataraman and Smt Ganga Ranganath. Each of them was driven to fight their own battles with their families, and yet continued to achieve deep personal satisfaction in their pursuit of Carnatic Music.  They said that motivation was their inner voice that egged them on.  It never occurred to them to seek recognition or approval from their kin.

The producer, Indu Balachandran, has a long history in community development, including cultural development. A practicing musician in the Carnatic tradition, working in cultural development was enlightening for her. For a person from a community for which culture is a rich and mixed bag of tradition, ritual, art, temple, kinship, language, clothing, food and all that comes with it, she is deeply interested in how culture can be made and expressed by all people in a place like Australia – a place that draws its people from all over the world.

In a brief interview after the event, Indu revealed that her own grandmother (Smt. Narasimhan) was the inspiration behind this project. As Indu tried to connect with her past, she feared that something private and personal was being sensationalized. Indu thus, chose to involve other members with a similar vintage among the community elders who had different experiences to relate, but who felt safer in the knowledge that they were not alone in their personal struggles.  Indu is overwhelmed with the response and encouragement from the community and although she has no immediate plans or projects for the future, she wishes to continue where she left off.

“I am thrilled to see both the distinct, singular quality of the tradition AND the possibilities of offering the tradition to the rest of the Australian community.”

Her Inner Song crosses over a number of platforms, to engage older members of the community in digital media.

The documentary film captures the narrative of the women’s stories, in their own voices and words. Primarily in Tamil, with English subtitles, the film offers a rich, visual journey through the lives of these 5 women. The documentary will be shown through live screenings so that the community can come together to honour the stories of those before us, and create new conversations about what next.

“This revealed to me how women have struggled in life to progress with their music and how our generation takes what we have for granted. I can see that music for these women meant a lot more than just performing – it is a part of them.”

Research has been undertaken to enrich Australian understanding of Carnatic music in this country. This will form part of Parramatta’s Heritage Stories collection.

The website (www.herinnersong.com) hosts short clips on each participant, digitised music and deeper information about the project, participants and the crew.

Following the screening, the overwhelming response from the community was a desire to see more cultural content like this, that is relevant across generations and facilitates reflection on tradition and cultural heritage in the diaspora.