He ain't heavy, he's my brother 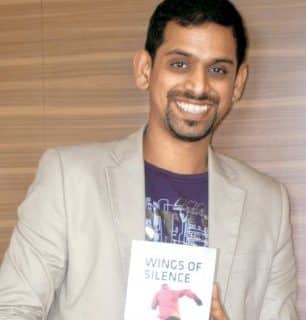 Wings of Silence (Silverfish, Bangalore, 2012) is a debut novel by Shriram Iyer, a Melbourne-based management professional.  Bangalore born Shriram Iyer is somewhat of a high-achiever; besides his busy career, he has authored several short stories, theatre scripts and screenplays for short films. Silver medallist under the Shankar’s International Award given by the President of India, Shriram is also a professional singer who has to his credit an Indian pop album, Is Dhundh Mein, (released in 2007 by singer Shankar Mahadevan), as well as over 400 concerts in India, Australia, New Zealand and the USA.
Wings of Silence is about two brothers in an Indian-American family and their epic journey en route to winning an Olympic medal for Raj Sethi, who is the elder of the two, but born deaf.  Saurav Sethi, the younger brother, is a tennis prodigy and a Grand Slam champion in the making, but he watches his elder brother Raj fight a losing battle in life and plunge into the depths of depression.  All this time, their father Akshay Sethi pours scorn on his elder son’s attempts to make something of his life, and heaps attention only on Saurav.  Unable to countenance this injustice, Saurav gives up tennis and his own chances and ambitions to resurrect his brother Raj’s life. Unable to make their father understand, they run away from home together and embark on a rollercoaster ride that will push their courage and determination to the limit. As the story unfolds, the brothers bond emotionally, and there are a few twists and turns.  Fortuitously, they receive considerable help from Sourav’s ‘soulmate’ Shalini, and their rather rich aunt who had been banished from their family circles some years earlier, for an indiscretion.
As Saurav prepares to give Raj a life he deserves, the reader is drawn into the world of the two brothers, and becomes engrossed in their travails and their setbacks, the strength they draw from the enormous trust placed in them by people within their close circle place, and ultimately, their joy and triumphs.  The protagonists’ heartaches and their elation at realizing the impossible dream of running the marathon in the 1980 Olympics engage the reader, and compels a feeling of anticipation – will this completely tear the family apart or bring them together again?  The saga is set against the cold war tensions of the time, and Iyer brings the political landscape of that period into clear relief. The training regimen of a marathon runner is meticulously woven into the narrative – Iyer seems to have had help from the Australian marathon legend Robert D Costella – and this brings a great deal of authenticity to the storytelling.