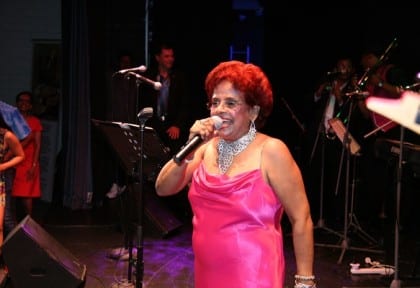 
The group Goenkarancho Sangat in Australia organised the shows to raise funds for Konseisanv Balgram, an orphanage run by Father Agnel’s Ashram, which has 620 orphans and underprivileged children in their care.
As part of the twin nation tour of Australia and New Zealand, Lorna and Ester performed in Auckland, New Zealand, followed by shows in Sydney, Melbourne and Perth.
In Australia, they were joined by comedy duo Ambe and Sally, who had the audience in splits with their jokes.

The music was provided by Norma Cardozo on the keyboards, Semy Braganza, one of the few trombone players left in Goa, and guitarist Dominic Clement, who flew in from London to perform especially for the show. A few Goan-Australian musicians also joined them in the accompaniment.
It was 72-year-old veteran singer Lorna’s first performance in both countries and she did not disappoint her fans.
With a performance par-excellence, Some of the timeless tracks included ‘O Mia Caro’, ‘Sorga Rajeant’, ‘Noxibak Rodta’ and ‘Nachom-ia Kumpasar’. She left the gathering spellbound with her captivating, deep and powerful voice.

Lorna showed no signs of ageing or slowing down, except for short breaks to allow the young and versatile Ester Norohna to belt out her own compositions or to allow the comedian duo of Ambe and Sally to take the stage.
Towards the end, Lorna’s breathtaking performance had the audience dancing in the aisles, and all were captivated throughout the show.
Esther was also at her very best, singing songs like ‘Chedum Bombaichem’, ‘Fulwali’, and ‘Meu Amor’, the song she sang in the Konkani film Nachom-ia Kumpasar.

Since it premiered in December 2014, Nachom-ia Khumpasar –  a Konkani musical drama film, based on the lives of two jazz musicians, Chris Perry and Lorna – has attracted several thousand views from all over the world. But one key person only watched the film for the very first time a few weeks ago, Lorna herself!
Believe it or not, while the award-winning movie that depicts the life and times of Lorna, the star had not actually seen the movie.
“Lorna watched Nachom-ia Khumpasar for the first time during a recent screening in Mumbai,” shared the film’s director Bardroy Barretto. “In fact, she would like to watch the film again.”

During the performance, Esther had a word of advice to the gathering, urging them to learn to speak Konkani, even though they were away from Goa.
Both women were a powerhouse of talent, and Esther assured the audience of her intention to return to Australia and do whatever possible to promote Konkani Down Under.
- Advertisement -
Share
WhatsApp
Facebook
Twitter
Linkedin
Previous articleFestive treats!
Next articleSongs of the Soul