Gift of the gab 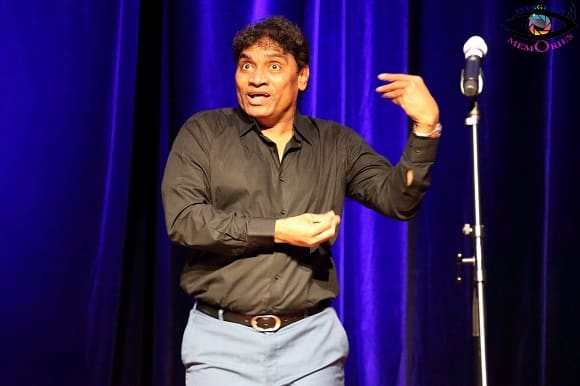 Appalling weather outside? How about a touch of comedy?
The wind was blowing the rain sideways and water was running down the streets, but that was no deterrent to hundreds of Sydney-based Johny Lever fans who braved the storms to see India’s most popular comedian perform at UNSW’s John Clancy Auditorium.
It was but a small hitch thrown down by Mother Nature: as the audience settled in, some damper than others, we were greeted in a quirky pre-flight-briefing style welcome. And as the ‘laughter flight’ took off, it became cozy almost instantly!

After a grand musical entry and a bit of dancing, Johny acknowledged the crowd by joking that he did not have as many guests at his own wedding. Chuckles…
Life abounds in comedy, observed Johny, if you just look around you. It was time to start popping out funny anecdotes one after the other. And before we knew it, the laughter flight was already cruising, as he bantered along with the spectators and mimicked our favourite Bollywood personalities.

Johny’s routine touched on issues that affect the common man; Bollywood trivia; flirtatious and inebriated characters; relationships and the like. The all-too-familiar noke-jhoke between married couples brought in plenty of laughs.
He also had a set of ‘custom-made’ jokes for the Sydney crowd, as he compared Aussie and Indian lifestyles, wittily speaking about the two communities’ attitudes towards cleanliness.
And of course, what’s a stage show without song and dance? Johny’s send-up of well-known choreographer Saroj Khan in her TV show Aaja Nachle received a “once more” request from the crowd. Of course he obliged sportingly, as he danced to the Aishwarya Rai number Thoda sa pagla thoda deewana, words that seem to describe his own personality perfectly. The jhatak-matak though would surely have given the ethereal Ms Rai a complex! As well, Johny simply nailed his famous channeling of Michael Jackson, like always.

The applause came in regular bursts of clapping, whistling and laughter. Many in the audience tried to contribute to the banter by shouting out opinions or even alternative punch lines. One hearty soul seemed a little bit different from the usual shy types and had heads turning. The discovery of this extrovert surely added to the overall experience, however whether positively or not, remains a question. However, thankfully the humour riot effectively distracted everyone from this deluge of annoyingly loud chuckles.
The comedy, the mimicry, the songs, dances, drama and much more, made it all total paisa vasool, everybody present will agree. (Kudos to organisers RD Entertainment).

For those who had reached a saturation point, the second half was different but just as entertaining, as Johny shared the stage with his eccentrically charming daughter Jamie. With her vibrant and confident personality, she made a remarkable premiere performance. Like father, like daughter, indeed. Jamie performed her fair share of mimicry, a mainstay in Bollywood-style stand-up comedy, and impressed with her singing act in a variety of languages.

Unwinding from her cocoon to be a female stand-up, she has clearly followed the unstoppable forces of nature, or should we say genes, or as Johny put it, a ‘manufacturing defect’. As she confidently shared her funny observations, it was obvious that she is here to stay.

Earlier in the evening, the opening act Sumeet Shinde set the stage beautifully for what was to follow. Master of mimicry himself, his own high-octane performance was based on imitating famous Bollywood stars in their quest to ‘find the Don’. Everyone’s favourite act turned out to be the Aamir Khan gig, where Sumeet tried to make the find-the-don quest a Satyamev Jayate show issue.
Johny’s message to take home was simple: love, live and laugh, because, as Robert Frost observed, if we couldn’t laugh, we would all go insane.