Geek Sublime vs the scribe 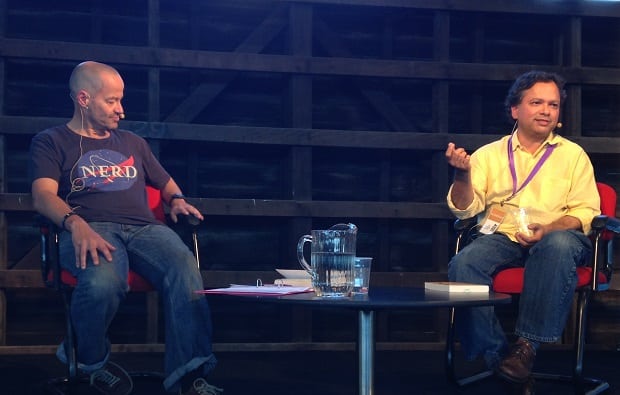 On an Indian summer’s day in Sydney there was a meeting between the geeks and the wordsmiths to hear their leader Vikram Chandra espouse words of wisdom. Fellow ‘nerd’ (as stated on his t-shirt) Adam Spencer was there to stir up the pot and make award-winning novelist and professional computer programmer choose a side: coder or craftsman?

The event was ‘Vikram Chandra: Geek Sublime,’ and the space that these two (usually) disparate groups met was The Loft at Pier 2/3, Walsh Bay, at the Sydney Writer’s Festival in late May.

Chandra’s latest novel Geek Sublime (2014) looks at the connection between these two seemingly opposed words, art vstechnology. In it Chandra questions whether code can ever be called beautiful, notes how Sanskrit is similar to coding, and pontificates over why he is drawn to both prose as well as computers.

It’s not the first time that Chandra, born in New Delhi in 1961, has been a guest of the Sydney Writers’ Festival, and this time he shared his love of programming with Sydneysiders. Chandra first impressed the literary world with his debut novel Red Earth and Pouring Rain (1995); won the Commonwealth Writers’ Prize with his second one, Love and Longing in Bombay (1997)and then continued to woo reviewers with Sacred Games (2006).

And now there’s Chandra’s first work of non-fiction, Geek Sublime, or as it is published in India, Mirrored Mind: My Life in Letters and Code. The work is part memoir, part literary theory and part study of technology. And the tone, well, it’s also quite different from his previous works. He explores his two worlds in this novel, which is almost a series of essays. He writes:

My writing life and my life with computers, in spite of their differences, seem mirrored, twinned. Both are explorations of process, of the unfolding of connections. Both reward curiosity, dogged patience. And perhaps it is just the double presence that I cherish, of art and logic.

So where does this geeky side come from, Spencer asked the Indian author. Chandra explained that after he graduated from the University of California he moved to New York, where he became obsessed with playing with PCs. Not only did he enjoy it, he “lusted after” them, and their “big hard discs,” he cheekily stated. He even went so far as to describe the Apple II as the “sexiest computer,” with its functional elegance. And so Chandra was hooked.

According to Kirkus Reviews (USA) Geek Sublime is “an engaging exercise in interdisciplinary thought, both elegant and eloquent,” which is also how I would describe the festival discussion. Chandra and Spencer had the entire audience’s attention captured throughout the talk. The novel and the talk both delved into the history of coding, the stereotypes of geekdom, linguistics, the gender imbalance in Silicon Valley and more.

Chandra’s latest novel came about during a pause while he was writing his next piece of fiction after Sacred Games. Instead of waiting until the issue with his work of fiction to be resolved, he ended up writing 20 or 30 pages of an essay on the culture of programmers, and it grew from there.

Chandra described the act of writing as “not pleasant,” but for him “programming has worked as an escape from that”.

“In computers I can completely lose myself,” said Chandra.

In programming, the computer is the game, but with writing, Chandra quotes Robert Hass who said, “It’s hell writing, but it’s hell not writing. The only tolerable state is just having written”.

He went on to describe programming as having a different level of absorption.

“After a day of literary work, which is very ambiguous, when you are always searching for something and not entirely sure you got it, programming is very certain”. Once you write a code you get “that lovely moment when you run your test and get feedback; the green tick… but with prose you have no idea,” Chandra told Spencer.

With books, on the other hand, Chandra believes that “after it comes out, it disappears. There’s nothing certain about it”.

In Geek Sublime he furthers this idea:

Making software gave me a little jolt of joy each time a piece of code worked… the world fell away, my body vanished, time receded… you can slam this pleasure spoke into your vines again and again, and you want more, and more and more.

“Because of the startling elegance of the simplicity of computers,” replied Chandra. “You can make logic gates out of even lego bricks,” but is very difficult to write coding with no bugs.

“You can have moments where a sentence crackles through” in fiction, which is beautiful, but with code the “clarity and expression of code is beautiful,” Chandra explained.

“The beauty in code,” he noted, comes from it being “concise, structured and linguistically flexible, and as such, many programmers see their work as a creative practice, akin to creating music or literature”.

“A line of code can be perfect, but prose can never be,” Adam Spencer noted on the topic.

There was also talk of the “architectural elegance of machines” by both Chandra and Spencer, who you might know from Triple J, ABC Radio and TV programs such as The Sleek Geeks. Chandra observed that while writing fiction, his “first draft will lack architectural coherence and shapeliness,” but that he has the same self-doubt when writing and programming.

However, he claimed, programming is never painful like writing is. While writing fiction, he feels a “fracture that leaves raw edges exposed”.

“All virtues one associates with writing can be applied to code,” Chandra mentioned to Spencer, as he described the process of both struggling through code or words, and the exact same rewriting process. “Some saybecause of hackers are the same as artists”.

And yes, he has the “same eureka moments in the middle of the night with programming and writing fiction”.

Programming is a “weird, macho, blokey environment” these days said Chandra, despite programming’s roots being a female secretary’s task. Interestingly, in the Sydney audience, the majority of those who identified themselves as being programmers were women.

At the end of the talk, during Q&A time, a female audience member echoed Chandra’s own dilemma of the culture of science and the arts, as she is a singer as well as a voice scientist. She asked Chandra, “Do you think this book resolves this dilemma?” Chandra answered by saying that the book was his desire to attempt to explain to his wife (Melanie) what he spends his time doing.

Another audience member who described herself as currently living in Bombay, described Chandra’s books as “a kind of code, going back and forth”. Chandra agreed with this and furthered explained that his interest in a wheel-like structure with repetition “is common in south east Asia”. 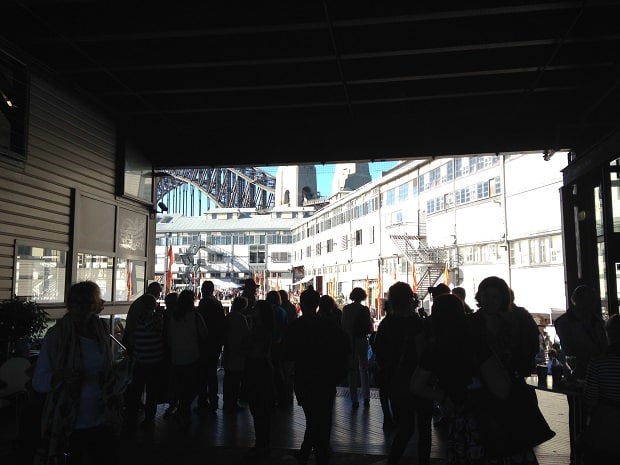 In his conclusion in Geek Sublime Chandra writes:

“Wri­ters and programmers ultimately do very different things, and that’s part of the argument of the book,” said Chandra. “All language is potentially suggestive,” Chandra believes. With coding ambiguity can be disastrous, however, with prose it can produce depth, or rasa (aesthetic pleasure). Chandra now codes as a hobby and is currently working on his next book, which was the one that was interrupted by writing Geek Sublime.

“Should everyone be taught code?” Spencer asked Chandra. Chandra replied, “Everyone should be provided the opportunity and tools to play with code and explore, but not everyone has to actually code”.

For most writers, computer programs are merely tools used to make work easier. Chandra describes fiction as his vocation, but coding as his obsession. He would rather code, but he describes not writing as not even an option. Without writing he becomes cranky, so his wife sends him off to write (for a while). So that answers Spencer’s question. Chandra is unable to choose just one, as they are both a part of him – one an obsession, and one essential. 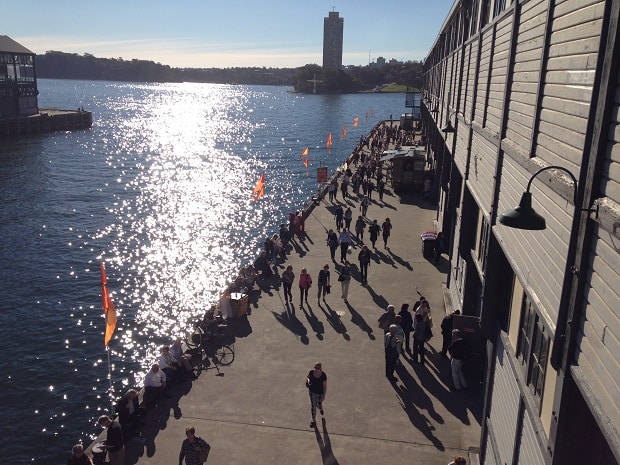 Just as Chandra reaches a reconciliation between geek and literature, east and west, Iain Pears in his review published in The Telegraph(UK) writes:

The effect of code, like that of literature, goes beyond language to reconstruct consciousness itself. Formal elegance in both is almost secondary: it exists, no doubt, and can be analysed. Chandra persuasively suggests that the true beauty lies in what it does to us, allowing access to the unfathomably vast, and changing the world.

It is language that binds the two together; the language of computer coding and the language of prose. Chandra seems to be the master of both. And for Chandra to make both topics interesting at the Sydney Writers’ Festival is another feat he quite capably handles, with a little help from Spencer.