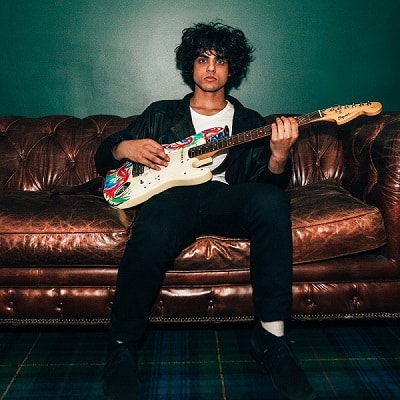 Chennai-born Darren Hart, known as Harts, is an upcoming Melbourne-based musician who plays just about every instrument imaginable. From his experience with the keyboard and bass, to the guitar and drums, Harts records and produces all of his music in a home-studio which he built himself.
His unique blend of Funk, Pop Rock and Soul, alongside his unstoppable energy and talent, is garnering attention world-wide. Harts’ parents moved to Australia from Chennai in the early 1990s, when he was around two years old.
They were both track and field athletes in India, and during his childhood Harts also thought he would follow in their footsteps. But when he started to play the drums in high school, he realised his innate love for music.

“I did track and field competitively from very young, but when I started playing drums, I discovered a love and a passion for playing, learning and performing music,” Harts recalls.
“As I got more into music and performing in my twenties, I found that I couldn’t invest the same time and passion into competitive track and field as much as was needed to progress to that higher level.”
Harts persevered to reach the top of his game by sending demo tapes to radio stations and uploading videos to YouTube. His efforts finally paid off when his music was chosen for Triple J’s Hit List and independent play lists across Australia.
One demo tape had a remarkable outcome, which landed Harts with the opportunity to meet and play the guitar with the legendary musician Prince in Minneapolis.

Following this, Harts released a debut album (Daydreamer) and EP (Breakthrough) and began to tour extensively across Australia, New Zealand and internationally. Rock icon Jimi Hendrix was a major influence on Harts’ early work. On the single ‘Streets’ for example, he references the heavy rock sound infused with raw energy. “Rock is a big part of my musical DNA,” Harts admits.
“But I am also influenced by other music styles like RnB, Funk, Soul, Pop, Hip-Hop and Jazz. Each style or attitude influences different parts of me. For example, Prince and Earth, Wind and Fire were a huge influence on the funk side of my song writing just as Hendrix and Buddy Guy were huge blues/rock influences on my guitar playing.”

Part of Harts’ success has been his value in maintaining creative control over his work. “I think that’s something that I really need in order to create and pursue my own vision for my music,” Harts says.
“I feel my art is best portrayed when it comes solely from myself.” He hopes that one day he will be able to have his own proper studio, but, “For now I think it’s more efficient for me to create at home with what I have.”

Becoming successful in the music industry can be difficult, and there have been many instances where Harts was close to quitting. “The underlying belief in myself, confidence in my music, passion, love and motivation keep me in the game fighting,” he says.
Harts attributes part of his success to the guidance of his manager Matt O’Connor, who he met around seven years ago. Hart explains, “He has been a mentor to me, with all the industry and business side of the music, which is especially important for independent artists.”

Harts has toured across Australia and the world, with his music receiving solid airplay on alternative radio stations. While on his musical journey, Harts speaks of the importance of communicating with fans and sharing music. “Social media has helped me connect with people, and helped people from all over the world find and connect with me and my music,” he says.
“The biggest thing for me, building awareness, has been word of mouth, and people spreading the music on social media, which has contributed to people then coming to see me play live.”
It is clear that Harts lives and breathes music. “I hope that my music and message continues to spread and bring something meaningful to people’s lives.”