From Mumbai to Moomba 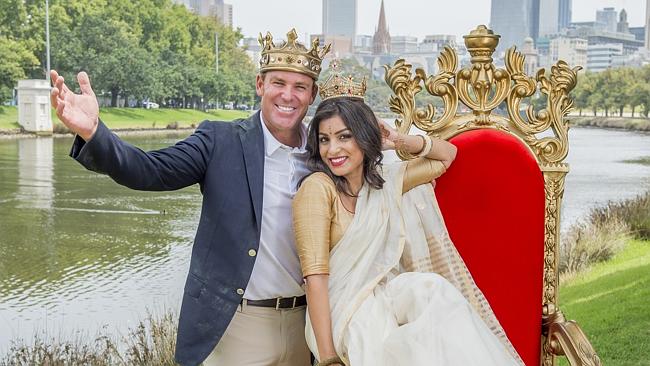 As a young child growing up in Melbourne, Pallavi Sharda loved the annual Moomba Festival.
The arts and culture event held on the Labour Day weekend, fell close to her birthday, and she thought it was a massive birthday party organised solely for her.
“It was always a fun family birthday outing,” she told Indian Link. “It was as if Melbourne was throwing a party for me!”
This year, Moomba will make it a special birthday for Pallavi. She won’t just be princess for a day, but, indeed, Queen.
The dancer and actor was earlier this month named Queen of Moomba, alongside cricketer Shane Warne who wore the crown as King of Moomba.
Both join a long list of celebrated and local achievers in their respective fields as Moomba Monarchs, and will lead the famous Moomba parade this year on Monday 9 March.
Moomba Festival, a much-loved community event in Melbourne, began in 1955. A family-friendly and inclusive program, it boasts activities and performances that celebrate local art and culture.
‘Moomba’ is an Aboriginal term which is said to translate as ‘Let’s get together and have fun’, but it is now well known that it really means ‘Up your bum’, and was suggested by Bill Onus, a high profile Aboriginal rights activist and successful entrepreneur, as a cheeky way of getting back at the local council.

Melbourne is renowned for its extraordinary diverse cultural identity and unmatchable local talent. This year’s theme focuses on curiosity and encourages participants to explore and realise the unique creativity that is inherent in Melbourne’s diaspora.
And that is why the unlikely pairing of Shane Warne and Pallavi Sharda makes sense.
Both ambassadors, proud Melbournians, have taken extraordinary steps in their respective fields and have aimed to integrate both cultures into their careers.
Melbourne Lord Mayor Robert Doyle has said he likes to choose “odd couples” for the role of Monarchs.
“After watching the Australian comedy Save Your Legs!, I knew that Pallavi was suitable to represent Melbourne,” he said.
“I then paired her with Shane because they complemented each other perfectly,” he added.
Doyle emphasised that Pallavi Sharda is the first Indian to have been bestowed with the Moomba Monarch title.

“I am honoured to represent Melbourne and I am thankful to be recognised for my efforts in the city that I love,” Pallavi said.
Pallavi graduated with a law and arts degree from the University of Melbourne and in 2010 moved to Mumbai to embark on a career in the performing arts.
Recently, Pallavi, a trained Bharatanatyam dancer, co-curated Sita’s Garden at the annual White Night Festival on 21 February.
Lord Mayor Doyle remarked, “Pallavi did not just play a part in the production. She was the centre of Sita’s Garden – she had an important role in designing the event.”
Pallavi is very excited at this new role in her favourite city. “I intend to use my stardom to help recognise the local Indian communities in Melbourne that want to achieve their goal of being represented on a national stage,” she said.
The Lord Mayor expressed his desire to see greater Indian participation in Melbourne’s large communal festivals. “I want to see more involvement in the Moomba Parade and also during the Australia Day celebrations,” he said.

“India and Australia have a lot to share and I intend to facilitate greater understanding and awareness amongst the local community,” he added.
Taking centre stage and leading the community in the Moomba Parade, Shane and Pallavi will provide a blend of Australian and Indian culture. On Monday 9 March at 11am, the community designed floats and 2,000 eager and passionate participants will parade through the crowds.
The Federation of Indian Associations in Victoria (FIAV), in association with Shiamak Dance Group Melbourne, have sent a call out to the community, seeking participation in the Indian float.
Pallavi met Shane for the first time at the Moomba launch. “He is an incredibly charming and charismatic man and I have always enjoyed watching him play on the cricket field. I think it is very fitting that an Australian-Indian actor and an Australian cricketer are taking on this role given all the wonderful multicultural events happening in Melbourne city right now, such as the White Night event.”
And what is she particularly looking forward to in this year’s festival?
“I think the float is going to display a bit of Indian culture and will be well represented, so that will definitely be something to look out for,” she replied. “The main area will be filled with activity throughout the weekend, allowing visitors to interact with performers and really be part of the show, so come along and have some fun!”

She added, “Like every year, the Birdman Rally will be fun to watch; my dad is threatening to participate in it using the Hawaizaada glider that Ayushmann Khurana used in my last film!”
(The film Hawaizaada was based on an early Indian aviator who built his own flying machine).
Dad Nalin Sharda meanwhile is very proud of daughter Pallavi. “On a personal note, I am so pleased for Pallavi that her hard work in recent years is being appreciated in so many different ways now,” he told Indian Link. “In a broader sense, her work has allowed the Indian community here to shine in the multicultural environment.”
“It is a great privilege and I hope I do the community proud,” Pallavi concurred, with humility.
Here’s hoping Moomba will be a rejuvenating short break from Mumbai for Pallavi!