Freedom: One spirit, many forms 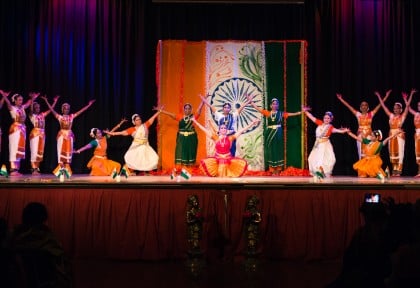 A tribute to India in dance

Independence Day evokes myriads of emotions and patriotic fervour in people of Indian origin, regardless of whether they are in India or overseas. Brisbane too played host to a series of events to mark the 69 years of freedom in August 2016.
On 15 August, the Indian flag was hoisted at the Honorary Consulate of India in Taringa, Queensland. On the occasion Mrs Archana Singh, Honorary Consul gave an inspiring speech at the ceremony.

On 20 August, GOPIO Queensland hosted the India Day Fair and celebrated in style the 70th anniversary of Indian independence. The event featured Bollywood music and dance, fireworks, fun, stalls and delicious food at the Roma Street Parklands.
On 28 August, Lalitha Kalalaya, Brisbane organised an event titled Swatantrayam as a tribute to Indian Independence, encompassing various themes from the freedom struggle enacted in a classical dance form. The event was held at the Clairvaux MacKillop College auditorium in Upper Mt Gravatt. The organiser of the event Smt Padmalakshmi Sriram teaches Bharatanatyam, an ancient Indian classical dance, in Brisbane and the inspiration for this event came from deeper introspection when she asked herself what independence meant for her at a personal level. That question could be expanded to all people of Indian origin and one could expect diverse responses from each person.

However, Padmalakshmi’s journey from being a dance teacher in India to becoming an Indian Air Force police official’s wife, to running a hugely popular Bharatanatyam dance school in Brisbane, is one of emancipation and vindication of self-belief. Hailing from a very orthodox Brahmin family in Tamil Nadu, dance forms were shunned and frowned upon by her family. Despite stiff opposition, Padmalakshmi’s mother Smt Malathy Santhanam encouraged her daughter to learn Bharatanatyam from the very young age of seven. Padmalakshmi’s eyes brim over with emotion as she recalls distant memories.
“In my life the sole inspiration has been amma…” she told Indian Link.  She described how she had to face many barriers and hurdles but Padmalakshmi persevered to master the ancient dance form encapsulated by Bharat Muni in the compendium Natya Shastra. In many ways Swatantrayam was also a commentary on the generation gap that is quite evident in Indian society, with the elders trying to impose their parochial attitudes on the younger generation and, in return, the younger generation failing to understand the sacrifices made by the elder generation to achieve a hard fought independence from colonial rule.


As most traditional dance performances go, even Swatantrayam started off with a Pushpanjali, which is essentially the invocation of divine blessings by praying to the presiding deity using flowers as an offering. The first performance was titled ‘Vande Janani’ which literally is a respectful salutation to the mother country, followed by delightful performances called ‘Engal Nadu’ and ‘Velli Pani’ which reminisced the pre-colonial rule era when Indian culture and society thrived and prospered as one of the oldest civilisations of the world.
The most brilliant parts of the show were yet to come. An incisive commentary was offered by comparing the three different means that were adopted by the Indian freedom fighters. Firstly, there was a poignant portrayal of the sacrifices made by the likes of Rani Laxmibai of Jhansi who chose to oppose the oppressive foreign rule through violent means. Secondly, the espousal of the nonviolent means of protest as idealised by Mahatma Gandhi were depicted. Thereafter the dancers highlighted the inspiration by poets and thinkers who nudged the sleeping giant that was India into a wakeful frenzy, ultimately leading to its wresting freedom from the British rule.

The evocative and inspiring poetry of Subramaniam Bharati, Alluri Sitaramaraju and Rabindranath Tagore formed the accompanying score to many of the dance performances. The sub junior girls’ performance of ‘Vande Mataram’ received thunderous applause from the packed auditorium. The finale of the program was aptly titled ‘True Freedom’ and was performed by the senior students who included the mums of the junior students.
Former Algester MP Anthony Shorten stated emphatically that it was the best dance performance that he had ever seen and he had felt an emotionally overpowering surge during the show especially when parts of the Indian freedom struggle were enacted.
Honorary Consul Archana Singh too mentioned that she had tears in her eyes several times during the performance when she saw the dedication and sincerity of the young dancers when they portrayed iconic figures like Rani Laxmibai of Jhansi.

Prizes were awarded to the outstanding dancers, with the top prize of most dedicated student going to Sangeetha Thayabaran. The second prize went to the sole Aussie member of the troupe Donna Garrison and the third prize honours went to Dr Champa Wickramasinghe.
Padmalakshmi also expressed her gratitude to her husband Sriram and her daughter Shivani and friends like Radhakrishnan who stood by her during the rigorous practice hours.
To conclude, she told Indian Link that her message to aspiring dancers is: “Art is eternal and will shape you from head to toe. It gives you strength, courage and self-belief.”
Kudos to the gutsy lady!
- Advertisement -
Share
WhatsApp
Facebook
Twitter
Linkedin
Previous articleTrue representation
Next articleIndia is fertile ground for disruption