For the love of the rhythm 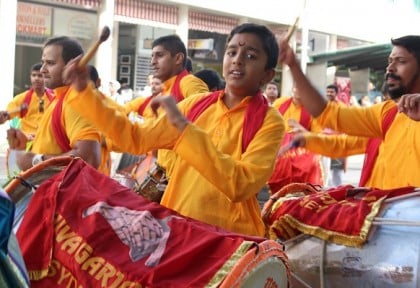 What is the common thread that connects the interests of an 8-year-old to those of a 60-year-old?  It is a language that transcends words and barriers, a sound that resonates with happiness, fervour and unity; it is the hypnotic rhythm of the dhol-taasha.


Shivagarjana Sydney is a dhol-taasha group whose members share a passion for this ancient art form and desire to preserve its rich heritage. The dhol and taasha are two different instruments each producing unique sounds but work in harmony when played together. The dhol, the larger of the two instruments, weighs anywhere between five to 11 kg, and while a taasha may be smaller in appearance, it packs a punch that equals the former.
If you thought these instruments merely serve the purpose of entertainment, you’re in for a surprise!
“Dhol and taasha have found a place in history,” says Poonam Patole, a Shivagarjana volunteer. “In the olden days, when the kings and soldiers went to war, the dhol was played for the army to boost their enthusiasm,” she shares.
In India, the dhol also played a pivotal role in social reform and instilling patriotism. “In 1893, Lokmanya Balgangadhar Tilak introduced the tradition of celebrating Ganesh Chaturthi as a large-scale public event in which the dhol-taasha was played to bring the people together for the common cause,” Patole adds.

Shivagarjana Sydney is now 75-members strong, but 10 years ago it was a different story. The group had humble beginnings in 2007 with just a handful of members, one dhol and a taasha, and a whole lot of love for the art. Now, the group attracts a rising number of volunteers, young and old.
“Our youngest member is eight years old and the oldest is 60,” says Patole.
From students to station operators to corporate executives, Shivagarjana Sydney is a motley crew. Along with the rising membership and the interest the group garners, they enjoy a multitude of opportunities to perform in various platforms.
Earlier this year the group performed at the National Multicultural Festival in Canberra.

“It is one of the biggest occasions on Canberra’s event landscape,” says Poonam. “It was an honour to showcase our performance in an iconic event that celebrates cultural diversity.”
It was also the first time in 20 years that an Indian group performed in the event.
“In the event, some of our group members performed the Barchi dance to go with the beats of the dhol-taasha,” shares Milind Dengale, the lead dhol player for the group. “Our loud rhythm and colourful performance captured the audience so much that it was encored!”
The not-for-profit group frequently performs in New South Wales temples and at multicultural events around the country.

“The dhol-taasha performances are a grand event during Ganesh Chaturthi in Maharashtra. Shivagarjana Sydney is proud to be carrying that tradition forward even in Australia,” says Dengale.
The group has been performing at the Sri Venkateswara Temple, Helensburgh to ring in Ganesh Chaturthi festivities for three consecutive years. Another crowning glory for the group was their performance at the Allphones Arena in 2014 where they welcomed the Prime Minister of India, Narendra Modi with their beats.
“We were honoured to welcome Modiji into the arena with our dhol-taasha performance,” Patole and Dengale fondly recall.
The rhythm and sound may be the soul of the group, but an untiring team works behind the scenes to make each performance possible. A few members have assumed different roles where they manage logistics, PR and marketing, purchases, costumes, administration and much more.

This year marks the 10th anniversary of Shivagarjana Sydney, and the group has thrived because of their shared passion for the hypnotic beats of the dhol-taasha. As with any success story, it did not happen without challenges.
From the sheer size of the instruments, the time it takes to hone the skill, to the physical exhaustion of playing the instruments for long hours, together to tackling with the noise complaints during practice sessions, the group has seen it all.
“Practicing for the events has been one of the major challenges,” shares Dengale. “The music is loud and local residents have raised an eyebrow about it. We’ve also had cops come to our practice sessions with requests to keep the noise levels down, which is impossible given the sound the instruments produces.”
He says that the members have now found a place in East Hill, far from neighbours, to play to their heart’s desire without inconveniencing anyone.
In spite of the challenges, this group seizes every opportunity to bring the community together. As the world moves forward, Shivagarjana Sydney celebrates unity through their beats and is dedicated to sharing their traditions with wider Australia.
- Advertisement -
Share
WhatsApp
Facebook
Twitter
Linkedin
Previous articleWhen Turnbull met Tendulkar
Next articleWe are family, hum sath sath hain