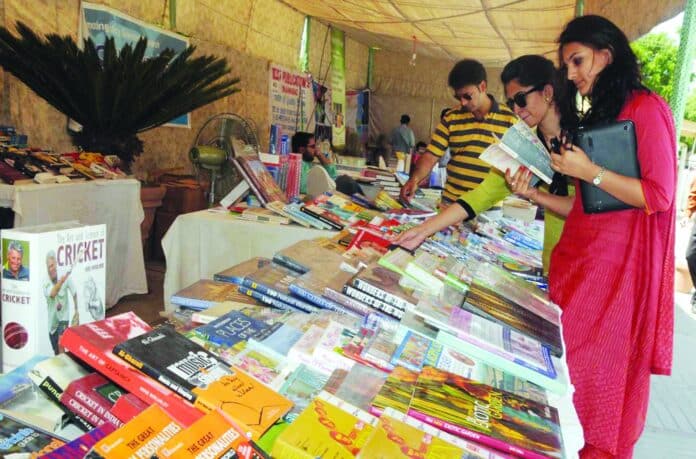 The Literature festival, Lit for Life, launched five years ago in Chennai over a single evening by the newspaper group The Hindu, has now grown into an annual three-day event. This year it was held over 16,17 and 18 January and curated by Dr Nirmala Lakshman, Director of The Hindu group of publications. It also included The Hindu Prize for the best work of fiction, which was this year won by Ashok Srinivasan for his debut collection of 13 short stories, Book of Common Signs. For book-lovers, this was the place to be in January, as the festival ran in tandem with the 38th Chennai Book Fair, one of the largest of its kind in India with over 350 exhibitors.

The Festival was attended by more than a hundred writers from India and abroad and encompassed an eclectic range of subjects. Jonathan Gil Harris recounted some remarkable stories in the First Firangis – featuring tales of heroes, courtesans, charlatans and other firangis who became Indian. Charles Allen’s subject was Ashoka, the emperor; Atish Taseer discussed his new novel The Way Things Were. Dr Sharad Paul from New Zealand talked about his passion for his area of specialty, skin, and even presented a workshop on skincare! A panel discussion on our complex relationship with food included chefs Aditya Bel, Kunal Kapur and Manu Chandra. There was also the mandated workshop on creative writing and on writing memoirs and effective lyrics.

Jung Chang spoke about the birth of Modern China, and took part in a discussion titled ‘Powerful Women in Conservative Societies’. Ahdaf Soueif, a Cairo-born journalist, educated and married in England and who spends time in both places, spoke about her book Mezzaterra: Inhabiting the Common Ground – and her journey from a novelist to a political writer. Ammu Joseph, who has written a book on the media and women in India, was on a panel discussing the ‘feminine form’.

AR Venkatachalapathy and V Sriram (a prolific writer with special interest in musical history and heritage) spoke about writing the stories of Madras. There were sessions on Tamil theatre, and of course, the controversy surrounding Perumal Murugan’s book. One of the highlights was a Heritage Walk led by V Sriram; the walk started from the gate of the Directorate of Public Instruction, with Sriram talking about the origins of the great Surveys in the country, going on to the iconic Fort St George built in 1812, and onwards to the Madras Literary Society building and then the Library.

Over the years, panelists at the Festival have come to include significant names from Tamil, Telugu, Kannada and Marathi fiction, as well as authors from genres other than fiction.

The Zee Jaipur Literature Festival, which ran from 21-25 Jan, organised by William Dalrymple and Namita Gokhale, and begun in 2006, has now firmly established itself on the world’s literary festival calendar. It is probably the largest free literature festival anywhere in the world, and it has grown from strength to strength. This year saw the likes of V.S. Naipaul, Ahmad Rashid, Kamila Shamsie, Paul Theroux, Chetan Bhagat; Anatol Lieven, Hanif Kureishi, Simon Singh, James Astill, Jeet Thayil among many others, along with Christos Tsiolkas, Lionel Fogarty, Ali Cobby Eckermann and Mandy Ord from Australia.

As the two literary festivals ran back to back, several authors such as Jung Chang, Samanth Subramaniam, Chetan Bhagat, and others attended both festivals.

Hanif Kureishi, Amit Chaudhuri, Paul Theroux and Farrukh Dhondy featured on a panel discussing Naipaul’s magnum opus, A House for Mr Biswas, now in the 53rd year of its publication, and its influence on global cultural thought.

Kamila Shamshie spoke about her novel A God in Every Stone based on letters written by soldiers from India who served in the Army during the First World War.

Best-selling Indian authors Ashwin Sanghi, Chetan Bhagat and Amish Tripathi spoke on several panels. Tripathi, Bibek Debroy and Namita Gokhale were involved in a round-table on the Mahabharata, the most challenging and complicated of the Indian epics. Gokhale told the huge audience that when she was asked to adapt the epic for children – and do it in six months – it took her two years to complete the task. She felt everything that could be said had already been written in the Mahabharata.

There were serious political discussions that ran alongside those about fiction. A session was devoted to relations between Pakistan, Afghanistan and India in the Google Mughal Tent with Ahmed Rashid, Anatol Lieven, G Parthasarathy, Khurshid Mahmud Kasuri and Suhasini Haider giving their views. There was a panel on “Agendas for Change in India”, inspired by Meghnad Desai’s book The Rediscovery of India, where the well-known intellectual examines the things that make India a nation and hold it together. During another session, a conversation between Tarun Khanna and Rahul Jacob was about China and India and their relationship, and the ‘billions of entrepreneurs’ that are forging ties between the two countries – incidentally, the title of Khanna’s 2008 book.

Rohan Murty launched his much-awaited Murty Classical Library of India book series which makes some of India’s greatest classics available to the world for the first time. It is a most ambitious project undertaken by a University Press, and includes 40 books in 12 languages. Murty explained that he stumbled upon the idea when he was doing his PhD in Computer Science at Harvard. When attending a lecture on Mimamsa philosophy, Murty was shocked at how little he knew about India’s rich cultural history.

There were several Bollywood items as well, which were predictably well attended and included names such as Shabana Azmi, Waheeda Rehaman, Naseeruddin Shah; while Vikas Khanna, host of Masterchef India, launched his Masterchef India Cookbook.

There was something at the festivals for everyone!