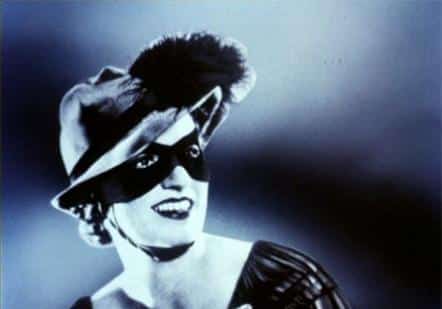 LP AYER on the woman with whips, quips and swinging hips, brought alive by modern technology

With India designated as the central theme, the Adelaide Oz Asia 2012 festival began with an event that brought forth two major elements of art – music and cinema – from both  India and Australia, in a  creative presentation. It was the screening of a 1930s black and white Indian movie titled Diamond Queen, with a modern and unconventional Australian orchestra providing a continuous music score as the movie rolled along.  Billed as the world premiere, this event was a novel and enjoyable form of entertainment lasting two hours.  The organisers couldn’t have chosen a better programme than this screening to herald the fortnight-long festival.

The Oz Asia Festival is in its sixth year running, and the organisers make each event distinctive by highlighting the cultural aspects one of the neighbouring Asian countries, at the same time presenting some top performers from other South and South-East Asian countries.

After watching the SBS show Bollywood Star a few months ago won by Teigan Lloyd-Evans, most current generation Oz-Indians may think that this the first time an Aussie girl has made it to Bollywood. They will be pleasantly surprised, perhaps even shocked, to know that the most prominent foreign lass to star in Hindi movies was a Perth girl named Mary Ann Evans, aka Fearless Nadia. She arrived there 80 years before Teigan, who has only got a look-in thanks to Anupam Sharma. Nadia however, had a long, long run acting in fifty films in the 1930s and ‘40s, with her latest in 1967 when the actress was in her late 50s.

The acrobatics of Aishwarya in Dhoom2 and Katrina Kaif in Ek Tha Tiger are a Sunday picnic compared to Nadia’s bag of tricks way back then. She became popular as the ‘Sultana of stunts’ and ‘Hunterwali’, after her most popular and daring film. However the blonde, blue eyed beauty did not just stop with beating up baddies, but delivered valuable messages on female equality, education and empowerment. At one point in the film Diamond Queen she says, “If you want freedom, you need to educate women.” This was at the height of British suppression of the Indian freedom movement. And it is a credit to the patriotic spirit of the Wadia Brothers, producers of the film, who allowed such lines to be included. Some historians of the Indian filmdom believe that the ‘angry young man’ persona of Amitabh Bachchan might have had its roots in Nadia’s role, combining stunts with social themes.

The show ‘Fearless Nadia: The woman with the whip’ comprised of screening important sections of her film Diamond Queen on a large screen with the Orkestra of the Underground seated in front in the form of an arc. The orchestra’s multicultural mix included traditional Indian instruments like the tabla, shenai, sarangi and harmonium along with usual western instruments like the trumpet, drums, violin, saxophone, clarinet, among others. I had some trepidation about how an old Indian movie could gel with an unconventional Australian orchestra, to perform as the opening show of a major festival. But soon the trepidation turned into admiration that kept growing with each succeeding scene. And it was thanks to the originality and creativity of Ben Walsh, the well-known composer and director.

The show began with the screening of an interview (given years before her death in 1996, at the age of 88) by an elderly and yet beautiful Nadia, reminiscing her movie days. Then, bang! Scenes from the Diamond Queen with English sub-titles appeared on the screen with the orchestra playing in perfect harmony with those images, helping the audience follow the story to the sounds of the live orchestra.  As the movie was not shown in its full length, the missing parts of the story were displayed in a couple of lines, so no one missed the plot. This kept the tempo and continuity going. A clever ploy indeed!

Unlike today’s heroines, Nadia delivered her dialogues and sang in good Hindi. Single-handedly she biffed a dozen dadas at any time, a must act for today’s heroes in every South Indian movie. But unlike those heroes, Nadia’s stunts were not brief stints but lasted the entire length of the film punctuated with some slapstick of that era, bringing peals of laughter from the audience very many times.

The stunts too, were not limited to Nadia on the screen. One of the orchestra’s members, violinist Shenzo Gregorio, was hoisted up in a triangular trapeze frame and held in mid-air as he continued to play his violin rolling in vertical rotation and also hanging upside down. Awesome! Earlier in the show, Ben Walsh and his drummer indulged in some kind of jugalbandi tapping their shoulders and thighs in perfect unison with the two tabla players, one of whom is well-known Aneesh Pradhan. Applause galore, well-deserved!

As the film ended on a happy note, true to Indian tradition, each member of the orchestra was beamed onto the big screen playing solo on their particular instrument. An ingenious use of the iPad. It was fitting, since the entire show was a blend of today’s technology with an entertainment medium of the last century.

Adelaide had the privilege of the world premiere and Mumbaikars will have the opportunity to savour this show when it travels there in November. The older generation can reminisce, the younger ones will realise that all the tricks and techniques of today’s movies are all old hat, and the Parsees will love to see what their sons, the Wadias, along with Nadia have achieved for the Indian art world.