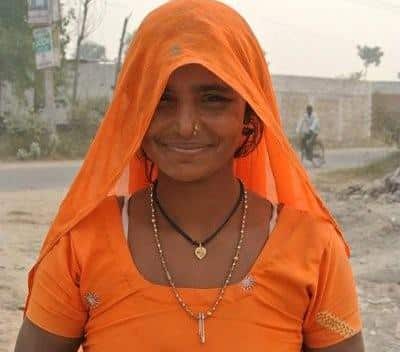 Sydney based artist Katy Fitzgerald’s exhibition A Tender Heart was a moving collection of photographs that expressed her love of India, as well as her passion for photography. Fitzgerald recently spent five months in India including volunteering at the Tender Heart School, and the photographs she took during this time form the exhibition, which showed at ArtHere Gallery in Redfern until July 4.
The exhibition aimed to raise the funds needed to bring several children with disabilities from the school to Australia, to participate in the Special Olympic Games to be held in Newcastle in November.
“I spent two months at Tender Heart in the village of Bhatola, working within the women’s program, helping to teach the local slum (I hate that word!) children basic English and Maths, and I spent many hours playing softball with the children with special needs,” Fitzgerald told Indian Link. “As a lover of photography, I also spent much time photographing the many aspects of Tender Heart, and the children and staff”. In addition, she took photographs in “Dharamsala, Mumbai – especially the Dharavi slum, as well as in and around Rajasthan”.
Renu Bali is the founder of Tender Heart School, which is linked to Opportunity Education. The school is situated in the village of Bhatola, on the outskirts of Delhi and was created due to Bali’s vision to bring opportunities and education to those less fortunate. The school runs classes for local children including those with disabilities, and courses for local women to learn handicrafts in order to earn a living.
Sandy Edwards, Director of ArtHere, was the curator of this exhibition of 32 images. “I had always known my exhibition would be somewhat of a fundraiser for India; however this gave me a very specific aim on which to focus – hence my exhibition was called A Tender Heart,” says Fitzgerald after she had discovered the need to raise funds for airfares. She also pointed out that donations can still be made.
“As a photographer, I am strongly drawn to photographing people,” Fitzgerald states. “I like to engage with the people I photograph, even a short conversation like ‘hello’ or ‘namaste’, or just a look to gain their permission to photograph them. I found most people I spoke to and approached were happy to pose for the camera, especially children who jostled with each other to get in front, and would then go into peals of laughter when I showed them the image,” she adds with a smile. Fitzgerald also speaks of her love of India, describing how it has “crept under my skin and into my heart, and refuses to budge! I’m addicted – happily!” Of her desire to go back to India on this most recent trip she says, “I really wanted to ‘be’ in India – not just travel through, but to work and live with Indians”.
Fitzgerald has a varied background, having worked in social research, counselling, psychotherapy and art galleries. What links all of these together is what Fitzgerald describes as her “high level of working with people,” which is what she values the most. “I am fascinated by people and how they live their lives, especially from other countries. My command of the Hindi language is very poor so I couldn’t speak very much with many of the people I photographed, however I believe that we can communicate with a look, expression and a smile. I like to communicate and connect with the people I photograph,” she reveals. Her photographic inspiration comes from the documentary photographers Dorothea Lange, Sebastio Salgado and the Magnum photographers.
Fitzgerald hopes that visitors walked out of A Tender Heart feeling uplifted! “I hope they saw the beauty, strength and dignity of the Indian people”. And because this is fundraiser she adds, “I would also like them to have felt a little more connected with India, and perhaps felt inspired to support Tender Heart, maybe even travel to India to discover their own love of the country”. On her desire to keep visiting the country, Fitzgerald explains, “I find Indian people creative, ingenious, entrepreneurial, with a great ability to really live and celebrate life, regardless of what life has handed out to them”. She adds, “I also recognise the many ills in India and don’t wish to gloss over them… India is a land so full of contradictions, incredibly rich people and incredibly poor people, and I would dearly love to redistribute the money a little more evenly. That may be a challenge, however I can do something here, by raising money for a good cause”.
It’s an exhibition full of the many faces of India, which is unlikely to have left viewers unmoved. And even if you missed out on seeing the exhibition before it closed, you can still contribute to its worthy cause.