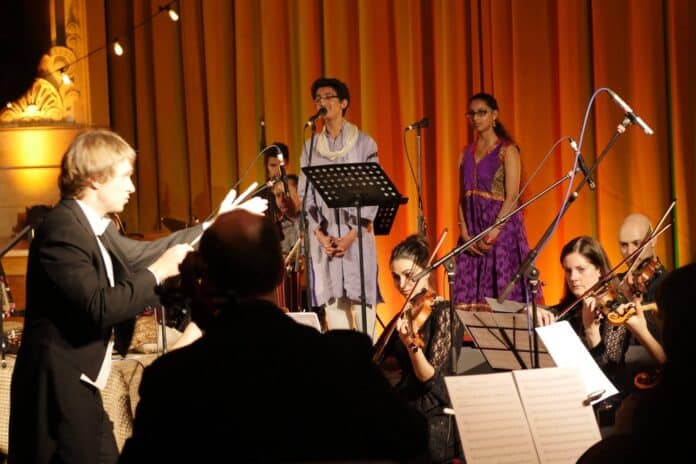 A triumph of musical talent took place recently at the Northcote Town Hall on a starry Melbourne night. A hoard of talented musicians from Tihai3 and Preston Symphony Orchestra came together to put on an extraordinary performance called East-West Fusion and Bollywood Music revival

The show was a sequel to last year’s highly successful Bollywood and Beyond, where Tihai3 collaborated with Preston Symphony to develop a musical tribute for the 100th anniversary of Indian cinema.

This year’s concert, organised by Darebin Arts Music Feast and Boite, featured a series of collaborative performances by Tihai3 – an Indian classical music trio based in Melbourne – and Preston Symphony Orchestra. Girish Makwana, founder of Tihai3, was on tabla, while Sabyasachi played Sarod, and Nicholas Buff played the saxophone. Buff was also the writer of the melodic tabla/sarod concerto, and the producer of the entire score of Bollywood music played throughout the show. The Preston Symphony Orchestra, comprised of many talented musicians, were led by the well-known conductor Michael Dobernig.

After the MCs Anita Barar and Sahil Saluja kicked things off, it was time for Tihai3 and Preston Symphony Orchestra to begin playing a 35 minute concerto fusion.

To place this concerto into some sort of context, it was an experimental work featuring orchestration of compositions from the Indian classical solo performance tradition; the development of melodic and rhythmic themes through composition and improvisation; and improvisation by the solo instruments based on elaboration of raga and tabla as practiced in Indian classical music.

The overall progression of the work was from slow to fast pace. Improvised passages by the sarod and tabla were alternated with composed passages featuring the orchestra. There was a gradual increase in intensity culminating in a final flourish that definitely got the audience, with dignitaries including Indian Consulate-General Manika Jain, to their feet.

After the break, as a tribute to Indian cinema’s music, Tihai3 and Preston Symphony played popular hit songs from Hindi films. These Bollywood songs were selected from each decade since the 1950s to reflect different eras in society. The MCs educated the audience about Bollywood culture, and shed light on the significance of music in Bollywood and how songs can depict the entire story line of Hindi films.

The songs were brought to life by the immensely talented sibling duo of Keshav and Samrakshna Ramachandran. Samrakshna, who moved to Australia when she was only 10 months old, started her Carnatic music lessons at the tender age of four, and was able to give beautiful expression to all the Bollywood. Her brother Keshav, who reminded us of a young Mohammad Rafi, also intoxicated the audience with this voice.

The songs performed were created by a range of Bollywood music composers such as Shankar Jaikishan, Laxmikant-Pyarelal and Madan Mohan, and sung by famous artists such as Kishore Kumar, Mohammad Rafi, Lata Mangeshkar and Rahat Fateh Ali Khan.

The final song of the night was a heart-warming composition by Girish Makwana and Nicholas Buff. The song, performed by both Samrakshna and Keshav, will be used as one of the tracks for Makwana’s upcoming feature film The Colour of Darkness. He has been working on the film for the past five years, and is currently in the pre-production phase. The film, which Makwana fondly talked about, illuminates the parallels of racial discrimination in India and Australia. Makwana said he hoped to finish the project in the near future.

With the final song complete, the audience was on its feet and craving for more music. Tihai3 and Preston Symphony Orchestra were extremely thankful to the audience and promised to follow this performance with another smashing concerto in the coming months.