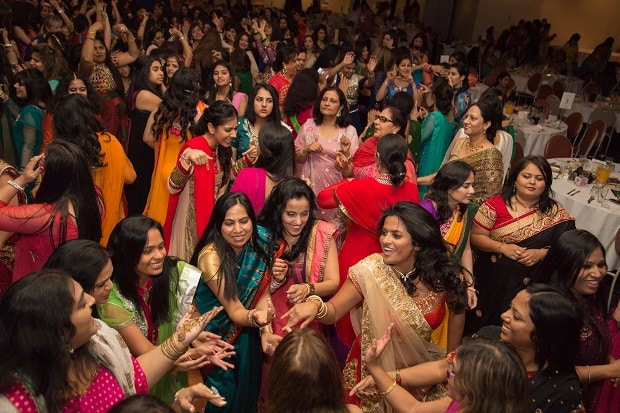 If you’re part of Sydney’s Indian community and you don’t know what Sakhi Sangam is, then you need to get out from under your rock.

This is the event where the yummy mummies of the community congregate annually for a glam day out.

Sakhi Sangam (literally, “girlfriends gather”), celebrated its sixteenth anniversary this year, with some 600 women in attendance.

All out to have a good time, they had some lunch, got some mehndi, bought some jewellery, a sari maybe, and generally kicked up their (beautiful) heels.

Hosts Nandini Thadani and Sushma Ahluwalia delivered a great show just as we have come to expect of them. Nandini did look a teensy bit frail after a year of ill health, but you wouldn’t have guessed it if you didn’t know: not a hair out of place, dupatta immaculately pinned, and an aura of studied calm about her. We hope her partner-in-crime Sushma took some of the pressure off her: she was her usual Energiser Bunny self, flitting around tirelessly, urging the guests to clap or sing or dance along in her typical Sushma way.

The MCs of the day were a similar case of perfect partnership: the beautiful Preeti Thadani in glamorous black and the exquisite Natasha Gujral in stunning orange.

Among the sakhis, though, the couture overall was so varied that it was hard to pick a trend – no particular colour dominated, or a specific style, except that it was bling abundant! There were anarkalis galore but the short kurta was still around, and we saw the designer sari as well as the traditional silk. Of course the sexy stringy choli was out in full force, making the full blouse look so last century… Oh, and you couldn’t have missed the oversize earring, no doubt a take-off from Deepika Padukone in Ram Leela.

The entertainment was routine Bollywood fare, but it served the purpose of setting the mood for the heavy-duty dancing that was without doubt the mainstay of the day. The shiny shoes were kicked off as the pallus were tucked in, and some raucous fun was had as the girls let their hair down. The music may have been way too loud given the average age of the movers and shakers on the floor, but no one seemed to care!

Lunch was quintessential Manjit, or should we say Kanwar, given the occasion? We’ve learnt to expect a surprise item on the menu from this crew, kadhi chawal this time round!

‘Quiet time’ after lunch came in the form of tambola, with some great prizes donated by the sakhis themselves. But it was back to the dancing very shortly, with the music cranked up a few more decibels if that was possible, to keep this rambunctious bunch in the mood.

Kids, you should have seen your mums…

Then again, if your mums have never done Sakhi Sangam, send them next year. Mummies need to let their hair down too, you know. (We’ll show you the pics!).